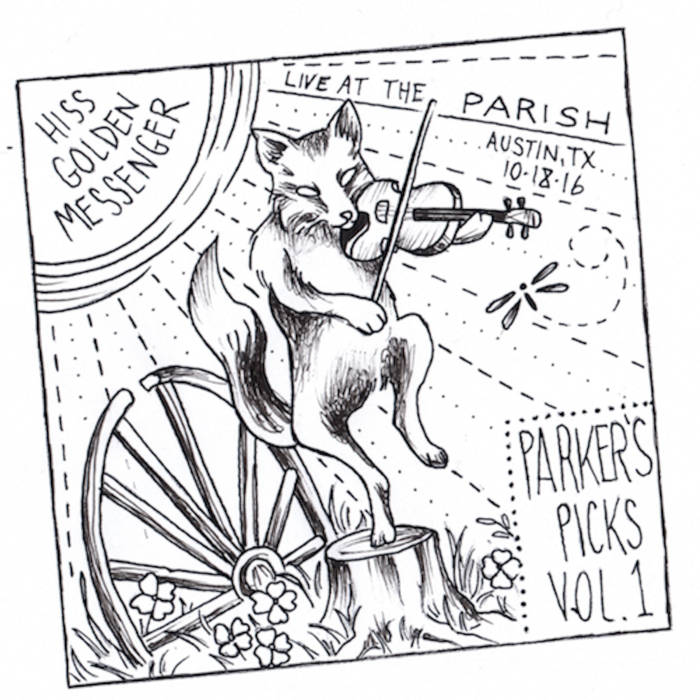 I presume you've heard of Dick's Picks.  But if you're a Deadhead who is searching for newer tunes, perhaps you'll appreciate the name of Hiss Golden Messenger's first band-recorded live set:  Parker's Picks Volume One.

Named for Warren Parker, who joined the band for their fall tour to archive the band's live sound.  What's more, MC Taylor and band are offering it to fans for free.

The show is from October 18, 2016 in Austin and offers a window into a burgeoning stage show that's decidedly different that what you hear on the excellent album Heart Like A Levee.

Parker himself adds some liner notes.

This was show #5 in as many days, at the start of a six-week tour that took us in a circle around the US, with a few stints into Canada as well. The trip ended up being about 13,000 miles total. Day 5 and we had already traveled from Durham to Asheville to Nashville to Atlanta to New Orleans to Austin. "Honkin' down the gosh darn highway," visiting these cities quickly, almost rushed, stopping long enough to preach the gospel of Heart Like A Levee to those who were hip, those who were ready. Heart Like A Levee hadn't yet been out in the world for two weeks, so the eagerness to preach was strong. We were anxious for people to hear it.

As far as his thoughts on why this particular show was chosen...

Hiss turned a corner at The Parish and it was obvious. To me, at least, but I like to think the crowd knew something special was happening too. They were attentive and appreciative. The energy on stage during HGM's set was gelling very nicely and it was noticeable early in the show, within the first few songs. It felt different than the four previous nights. Looser, but tighter, if that makes any sense. Mike even makes a comment about that during the set. "Finding the rhythm." Listen to the show and you'll get it, you'll hear it.

Have a listen for yourself: