Day four was the trip's other destination day and we woke up docked in Costa Maya. The first scheduled music of the day wasn’t until 6:00, so cruisers had the option of going to shore or just hanging out on the boat. I decided to do the later and rest up for a heavy final two day run of music.

Tank & the Bangas kicked things off at 6:00, and what an experience! I had never seen or heard their music before and could not quite get a grasp on it. My friend Therese leaned over at one point and said, “it’s like seeing Diana Ross on acid.” 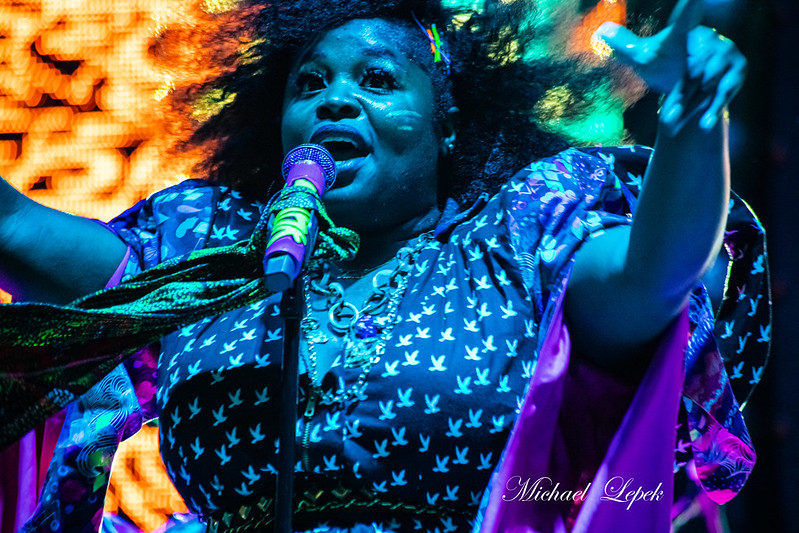 A perfect description that could either mean I was on acid or Diana was. Both worked. One thing for sure is that it is a sight to see. The music, the DJ beats, the horns, the colors, and especially Tank in all her glorious splendor: dead center moving like a four-year-old on a sugar buzz. She is superbly backed up by Kayla Buggage and Anjelika “Jelly” Joesph (who is now singing for Galactic). 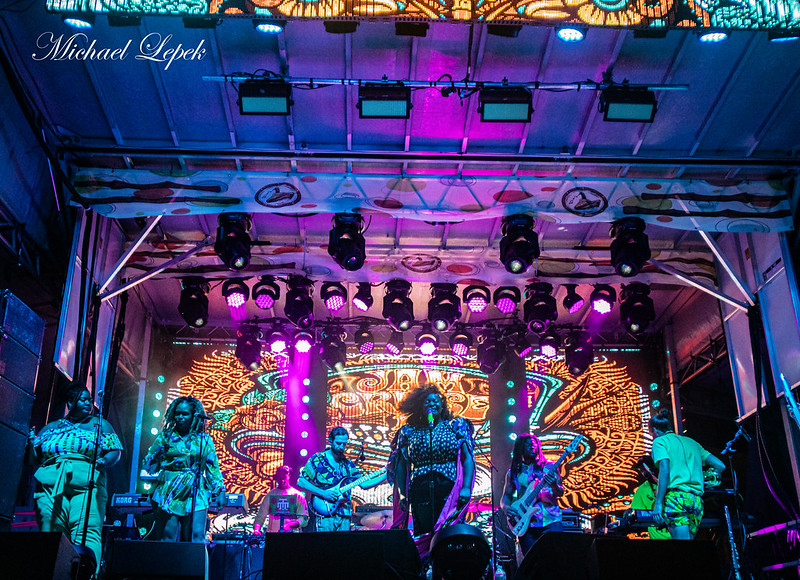 Here is where I made one decision that I came to regret. I left a little early to catch Jay Starling's atrium set after kicking myself for missing Aaron Magner’s set there previously. I missed what a lot say was a highlight of the cruise when Tank finished with a cover of “Smells Like Teen Spirit.” Choices must be made on Jam Cruise, and you win some and you lose some. I do feel like a rule of thumb going forward is to not leave a set early to catch the beginning of another.

At the atrium, I discovered that, due to an illness, Starling never made the boat. His two Love Canon bandmates Adam Larrabee and Jesse Harper, and The Chris Jacobs Band’s drummer Dusty Ray Simmons did an hour of jazz covering Martin Medeski & Wood, Stevie Wonder, and even the Andy Griffith Theme Song. 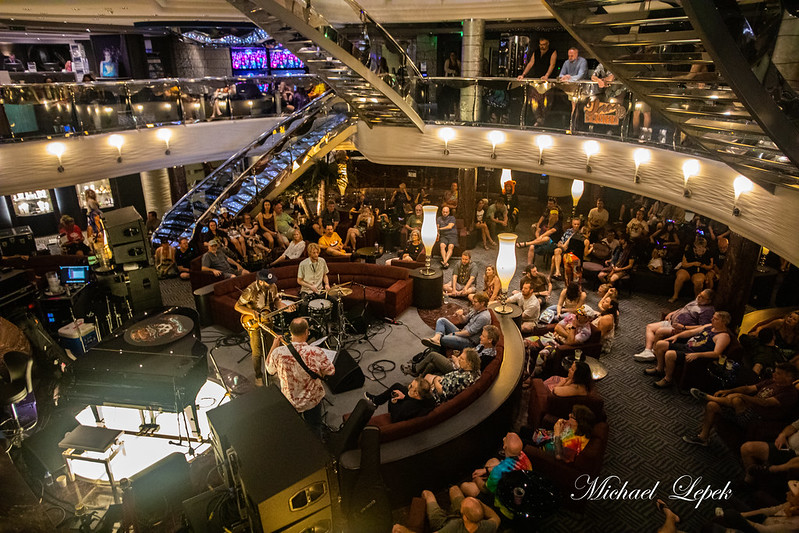 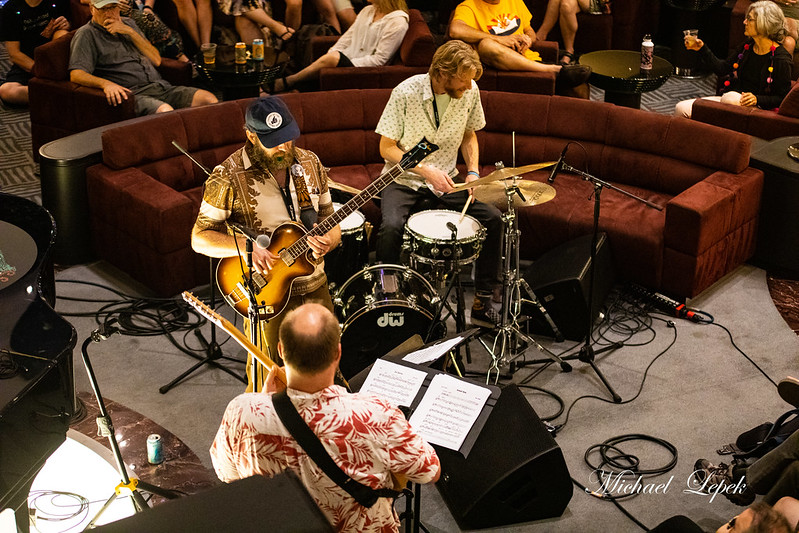 Next on my schedule was Circles Around the Sun, Part Two: this time in the theater. It was just as good as the first time around, playing basically the rest of their catalog. Once again just like at the end of their pool deck set, bassist Dan Horne ends the set by looking up at the sky flashing the peace sign and says “Thanks, Neal. We miss you.” It’s a pretty sweet, but heavy, exclamation point on some amazing music 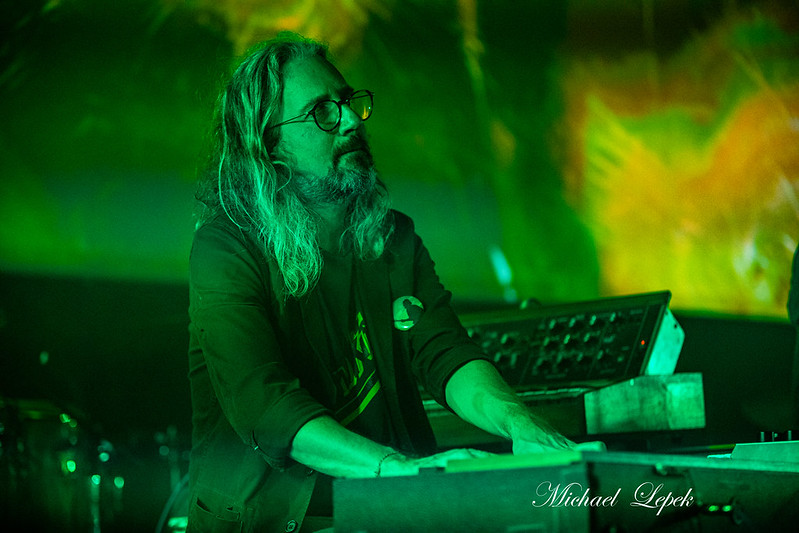 While in the theater, Mother Nature decided to get loud and winds caused the Garage-A-Trois set to be cut short. We had seen them at the Pre-Cruise party in Miami on Monday night. We therefore knew that this was a big loss, especially since it was Charlie Hunter’s first time on the boat. Little did we know at the time that there would not be another Pool Deck show the remainder of the cruise.

Still in the dark about what was going on deckside, next up was the Chris Jacobs Band in the Black and White lounge. The room was pretty full as Jacobs played some of his own tunes and then invited up Ivan Neville and Tony Hall to play a song from the Neville Jacobs project. Next, he invited Nicki Bluhm and Lebo on stage to cover the Band’s “Don’t Do It”, and Little Feat’s “Willin’”. 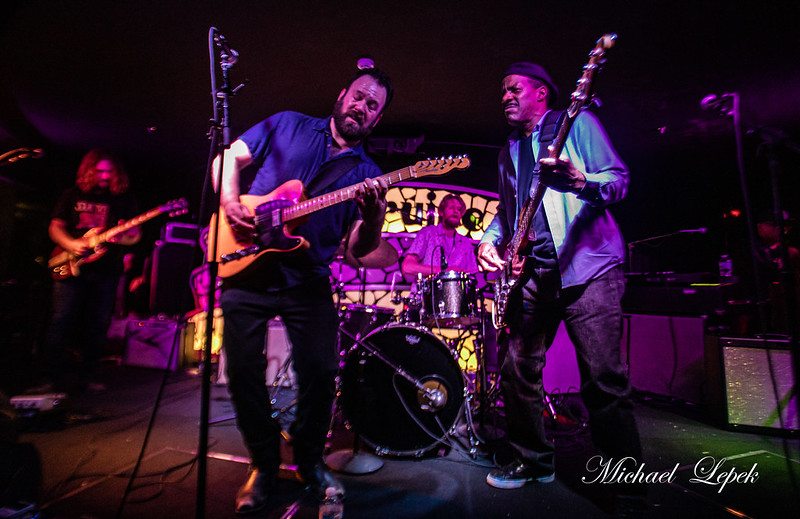 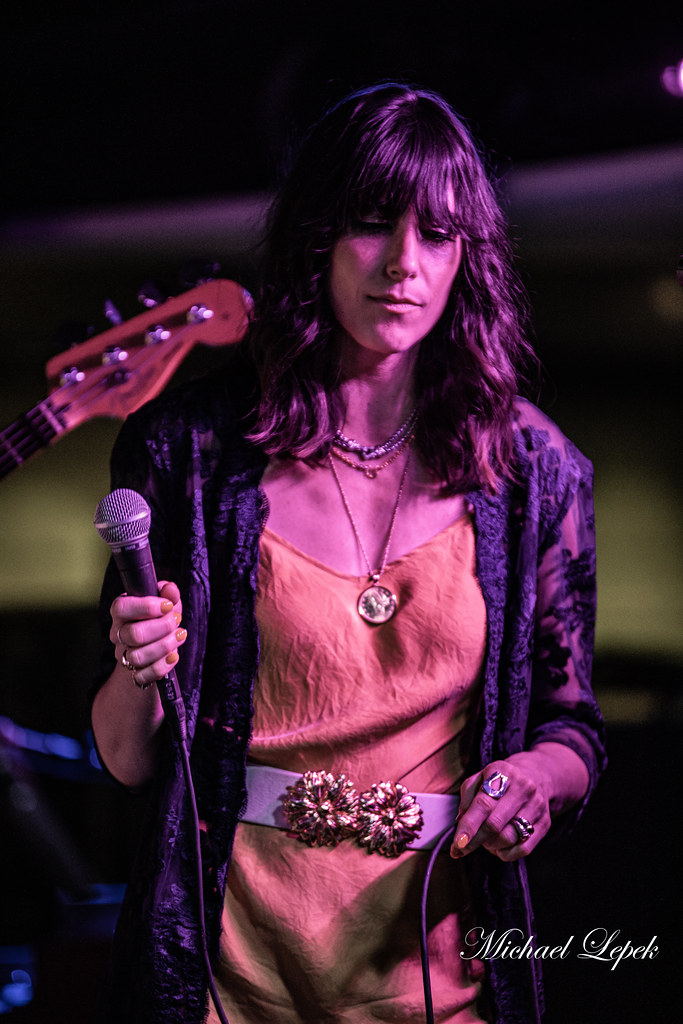 Word spread quickly about the winds, but no one really knew what that meant for moe.’s Pool Deck set. In the true nature of "lose some (bad earlier Tank decision)/win some", the Jam Cruise gods decided to smile upon me. After leaving the Black and White Lounge, and passing through the Atrium, I saw them moving Jim Loughlin’s xylophone right next to the grand piano. It didn’t take a genius to realize moe. was about to play a set in this hallowed area, and I got dibs on a spot literally at their feet. 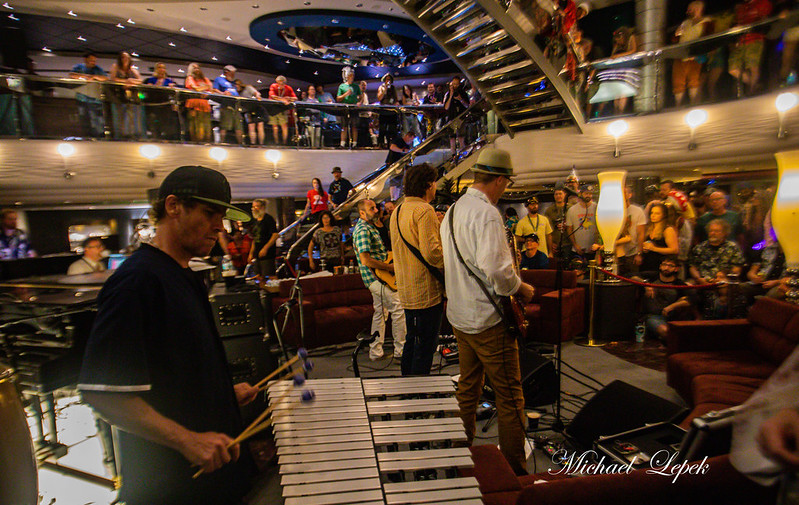 As the band wraps up their 3rd decade and steps into their 4th, we got two hours in a smaller space than they had probably played in since their first decade. It was a truly special experience to see them kidding around with each other while playing spectacular versions of "Water", "Crab Eyes" (where Rob lounged on the couch while Schnier and Garvey walked on the ledges behind him and basically dueled above my head), "Seat of My Pants", "Sensory Deprivation Bank", and "Recreational Chemistry", among others. 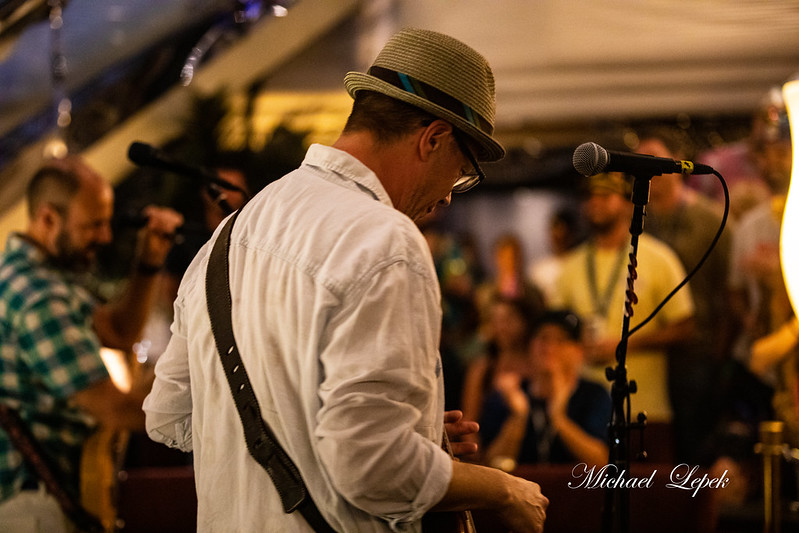 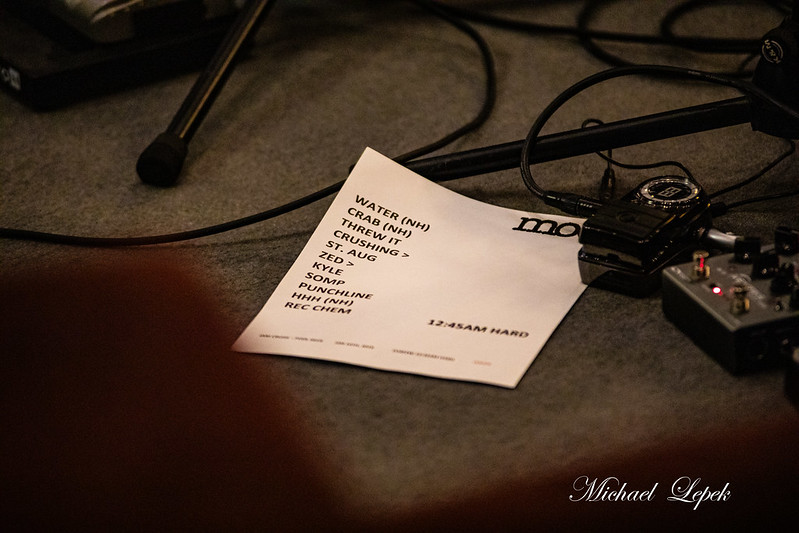 Mike Dillion joined for "Kyle’s Song", and had an incredible dual jam with Loughlin on the xylophone where they do-si-do’d while playing together. Considering we were on a Caribbean cruise, my hilarious highlight was when the band played "Escape (The Pina Colada Song)".

Derhak intro’d by saying that this is a song that they never seem to get right. I’d say everyone in attendance would disagree as it became a glorious sing-a-long. This set was probably the highlight of the trip and something I will never forget.

After this memorable set, Ghost Light played their theater set. It was as powerful as their pool deck set, as they relied heavily on Tom Hamilton’s previous band American Babies material. But similar to the first set, they sandwiched most of the songs around a Ghost Light original. This time “Don’t Come Apart Just Yet, My Dear” using the reprise as a sledgehammer to finish the set. I feel they may be the band the most people will be talking about after getting off the boat.

I made about a five minute stop in the Jam Room to basically say “I made it” again. Joe Marcinek was hosting, and I later heard Jeremy Schon and Tony Hall both showed up again as well as Marcus King and Nikki Glaspie from Nth Power. After my moe. experience, I felt pushing my body would just be greedy. It would be better to be fully recharged for the final day. Jam Cruise is all about decisions…

One. More. Day. Left. Check out our Day Five report. 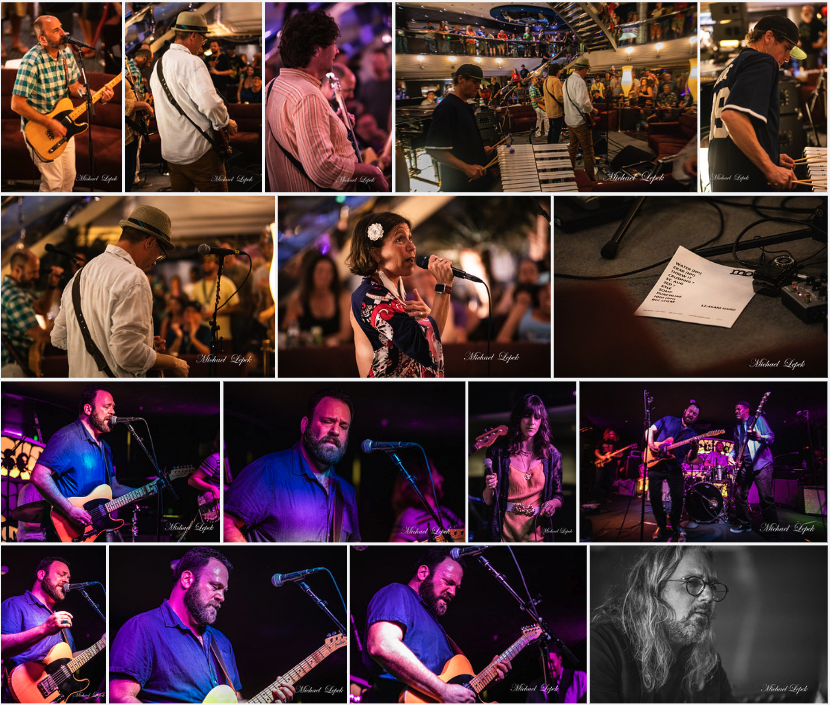 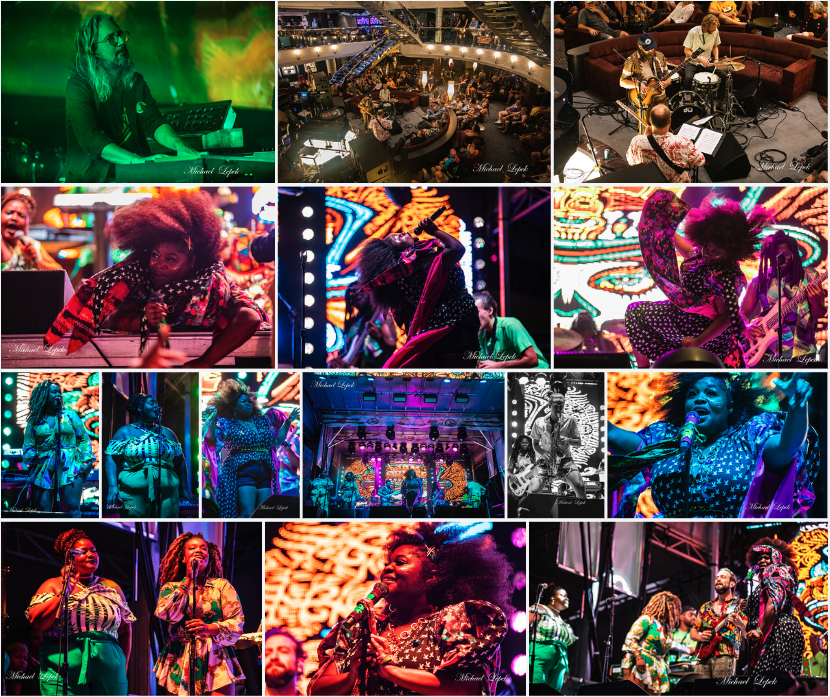 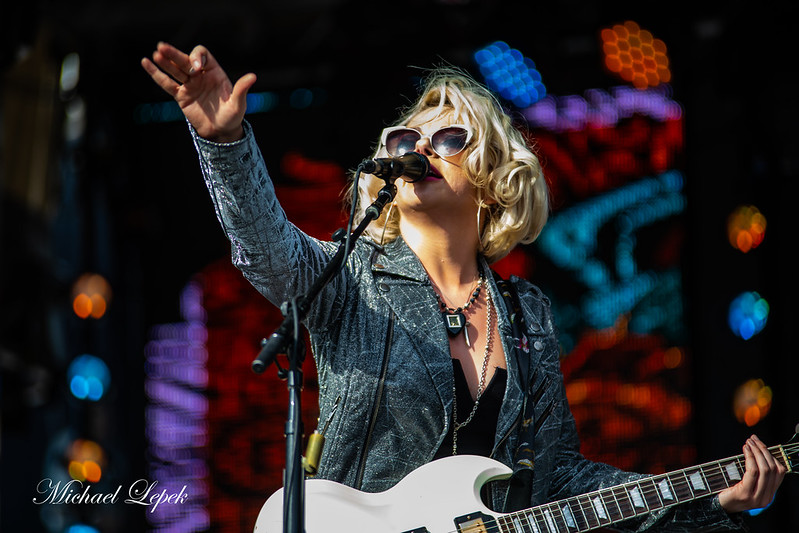