Starting at the end? If you missed our prior coverage, check out Day One,  Day Two, Day Three and Day Four.

This post covers the bittersweet final day of Jam Cruise. Your mind is saying, "I can do this forever," but your body doesn’t quite agree.

It’s a full day at sea with music starting at noon. Actually, supposed to start at noon. Due to the continual winds, the pool deck was temporarily closed, and the temporary would ultimately yield to permanently.

This is where you raise your glass even higher to the amazing job that Anabelle and crew do to scramble to make it happen. They are truly spectacular. Schedules relatively stayed the same, but the locations changed. Announcements kept people informed throughout the day. Some spots were altered and start times seemed a little delayed, but I didn’t hear a single complaint as cruisers just ventured from one spot to another. As the kids say, “it’s all good…”

I started my final day up at the Garden Pool, and arguably may have been the best hour plus time spent on the boat. While moe. at the Atrium was once in a lifetime show and musically superb, this time spent with Steve Poltz was beyond special.

He started his “soundcheck” for his 1:00 show a little after noon. He never stopped, periodically asking his sound guy, Sydney, about how he sounded. After being told good, he’d say, "let's try another."

He went through originals, covers including a number of Grateful Dead songs and Melanie’s “Brand New Key”. The Dead songs had Eric McFadden accompanying Steve on stage. We may have seen the longest version of “Ripple” ever as McFadden got set up and Steve shared stories including how he was sleeping with his tour manager Sharon, and Eric said he was too.

We even created a new song together using the called out words frickidiculous, kerfuffle, and something like "cauterwally". The smiles, laughs, and shenanigans were the epitome of what Jam Cruise is all about. As Steve summed it up perfectly when he said, “I just climbed into all of our heads to spread a little fairy dust to make us smile and be kind to each other.”

A stripped-down version of the Chris Jacobs Band followed Poltz. The two songs I heard were great, but I sadly could not stick around.

I had to head to the Theater for Everyone Orchestra. This was on my must-see list and did not disappoint. Conductor Matt Butler had quite a pool of talent to choose from. We saw Holly Bowling, Lebo, Karina Rykman, Samantha Fish, John Kimock, Steve Kimock, Leo P, Jelly, Greg Ormont (just on vocals), and Shira Elias... to name just a handful. 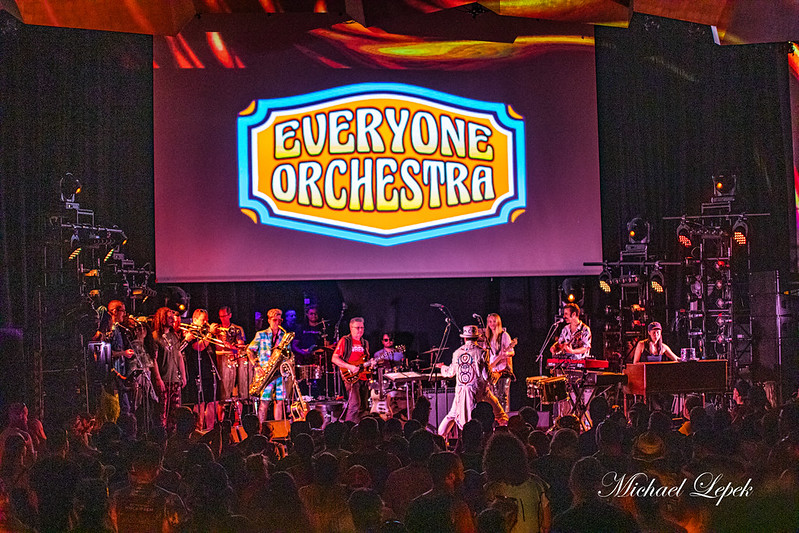 Fish, Lebo, both Kimocks, and Bowling each took a turn kicking a song off, and then we saw the magic happen as the musical improv formed in front of us. The singers created songs out of thin air with names like “Now’s The Time to Dance”, “My Girl’s Big Bottom”, and my favorite “Meet Me In My Cabin Later”.

We know the musicians are doing what they love on stage as we watch them with huge smiles. But with Everyone Orchestra, the musician’s smiles are bigger than ours as they seem to see the music being created at the same time we are. Plus, Butler incorporates us into the band as well, and it results in a “room full of peace and love.” 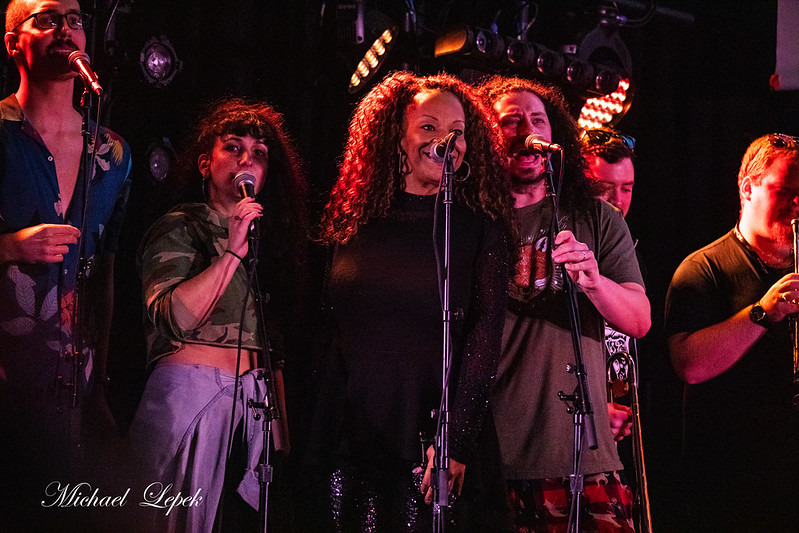 Mihali’s second solo set took place in a very windy setting on the Brew’s at Seas stage. Despite some technical difficulties with his looping equipment, he provided another very strong set. The highlight had to be when Too Many Zoo’s sax player, Leo P, joined in for “Mamunes the Faun.”

Another “must-see” act on a boatful of them was Marcus King’s Super Jam. They should have included Nigel Hall on the bill, too, since he handled most of the emcee duties, and according to King put together most of the setlist.

It was guest after guest as Luther Dickinson, Chris Martin, Nicki Blum, Ivan Neville to name a few joined King and Hall on stage. 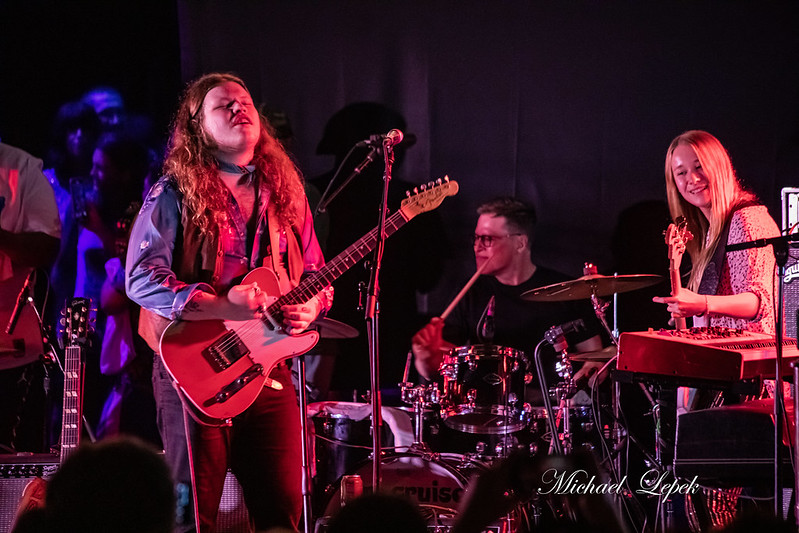 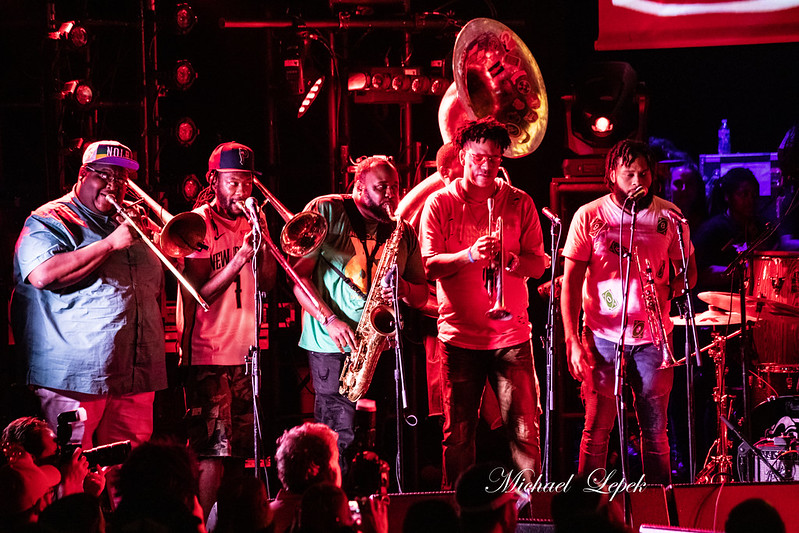 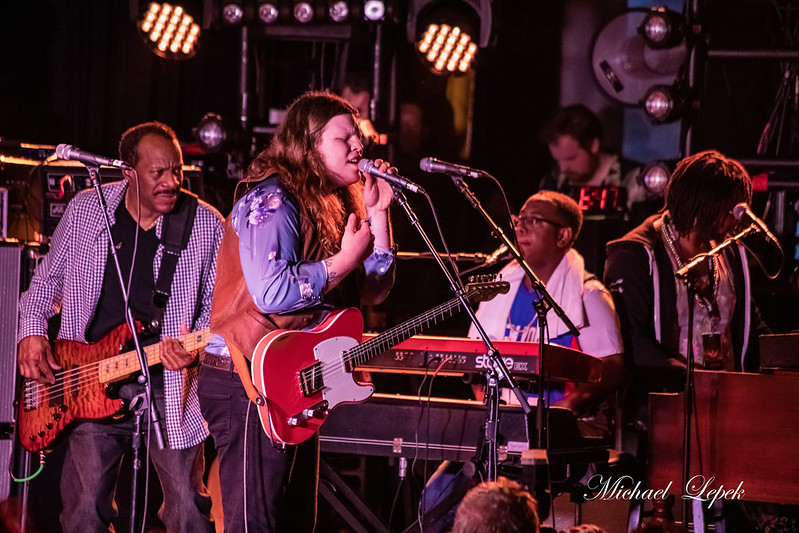 Samantha Fish’s follow-up set was moved from the Theater to the Atrium to make room for King’s jam session. She did not seem as happy as she did on the pool deck. Maybe it was the more restrained area or that she missed jamming with King, but regardless, the music still rocked. The highlight of this set was when Luther Dickinson joined in for some serious bayou guitar shredding. 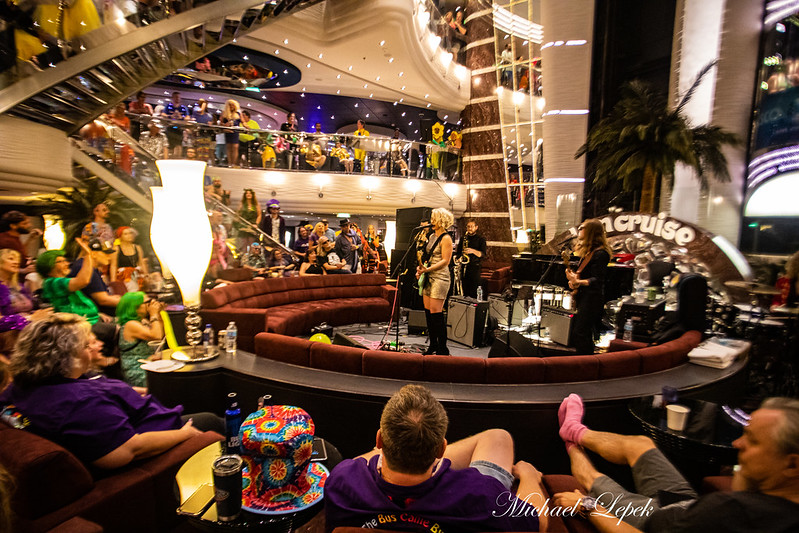 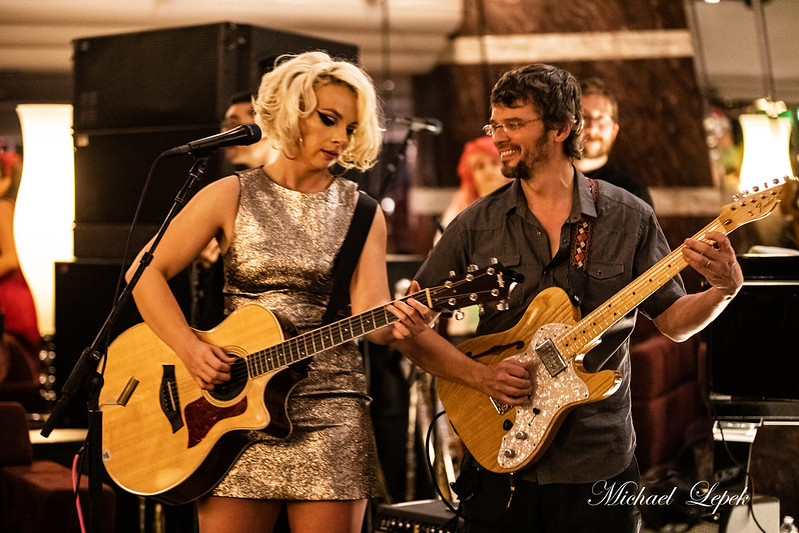 The Atrium went from blues club to piano bar when Holly Bowling came to do her solo set. This was my first time seeing her outside of Ghost Light -- in her "original" solo format and I was not disappointed. 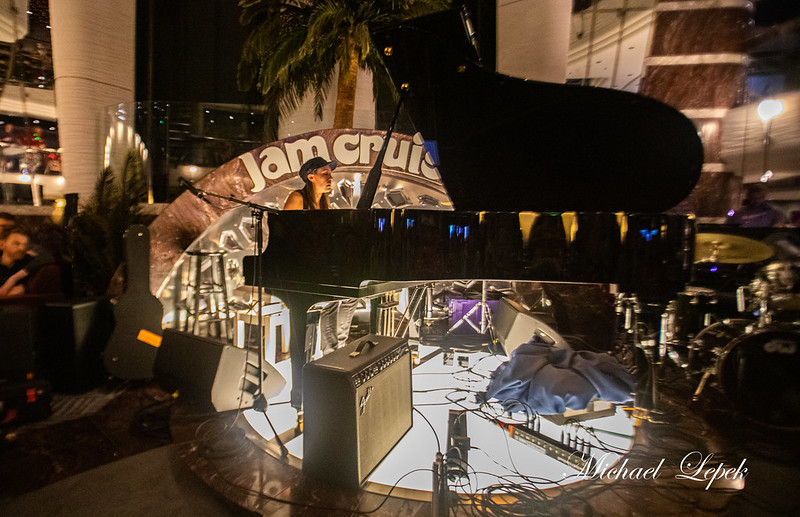 Then she brought friend Nicki Blum on for a song. Lastly, she was joined by current bandmate Tom Hamilton for an exquisite run through “The Wheel” that went many ways include a snippet of the "China/Rider" transition. 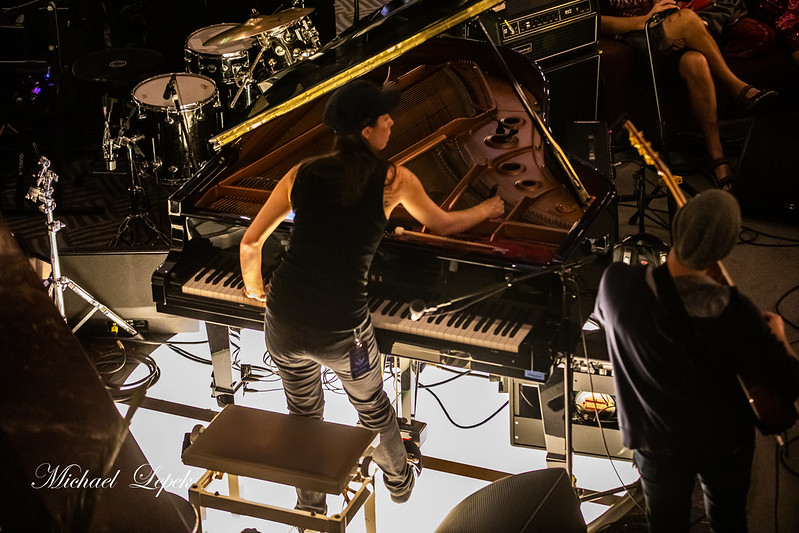 Next up was Galactic in the theater as they were again called on to close out another cruise. They did their job and had the room thoroughly boogeying for two hours.

They recently added Jelly from Tank and the Bangas as a lead singer. She brings a fantastic aura when she is on stage, and there is a noticeable bump in energy.

The middle of the set was slowed down for some vintage blues as legend Walter “Wolfman” Washington held court at center stage with the band backing him. They actually left the stage and came back for an encore which just doesn’t happen on Jam Cruise sets. They finished with the perfectly placed "Quiet Please" to say good-night and good-bye to this year’s cruise. 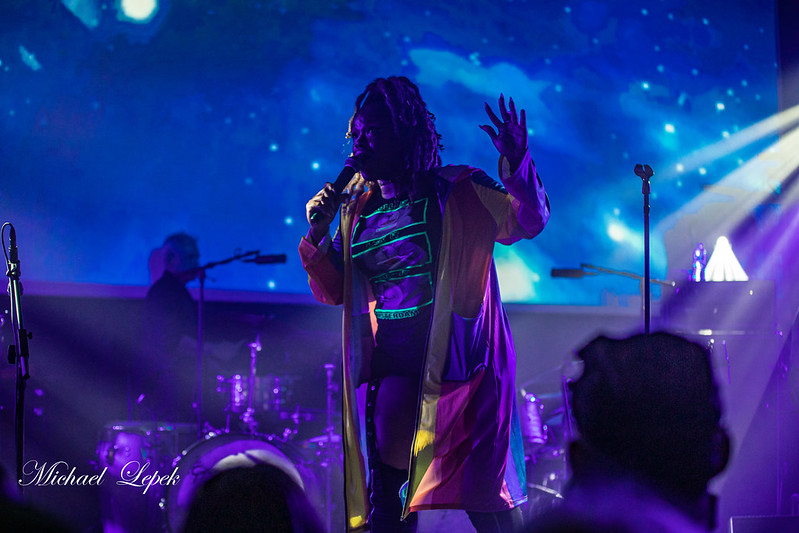 The Jam Room hosted by Roosevelt Collier stayed rocking until the boat docked.

I went solely to fulfill my goal of ending each night in the Jam Room. I retired after about 20 minutes of watching Collier’s wizardry on the pedal steel.

After five days consisting of personally seeing 45 acts covering about 70 hours of music, it was time to say good-night myself. And can’t wait to do it all over again next year! 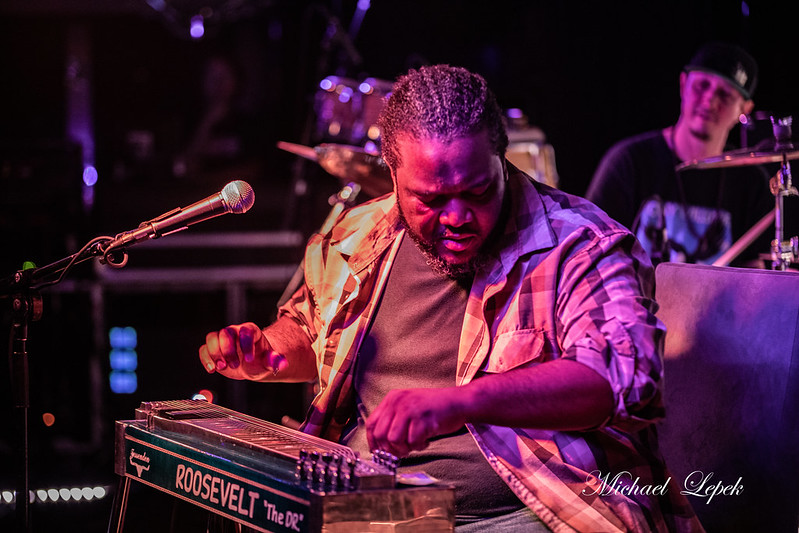 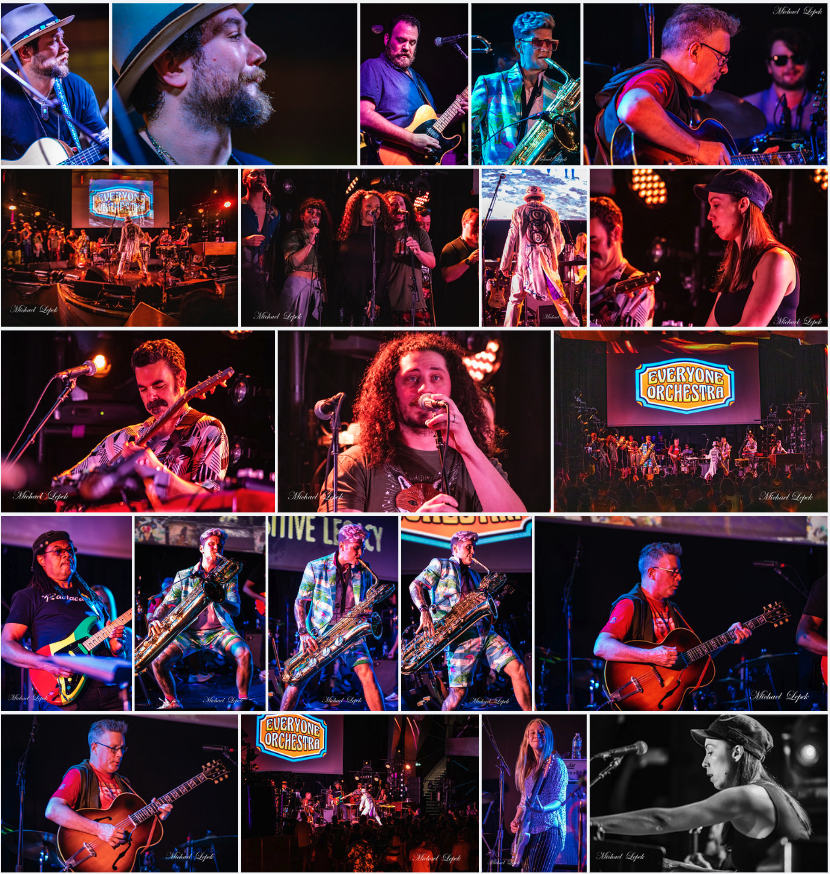 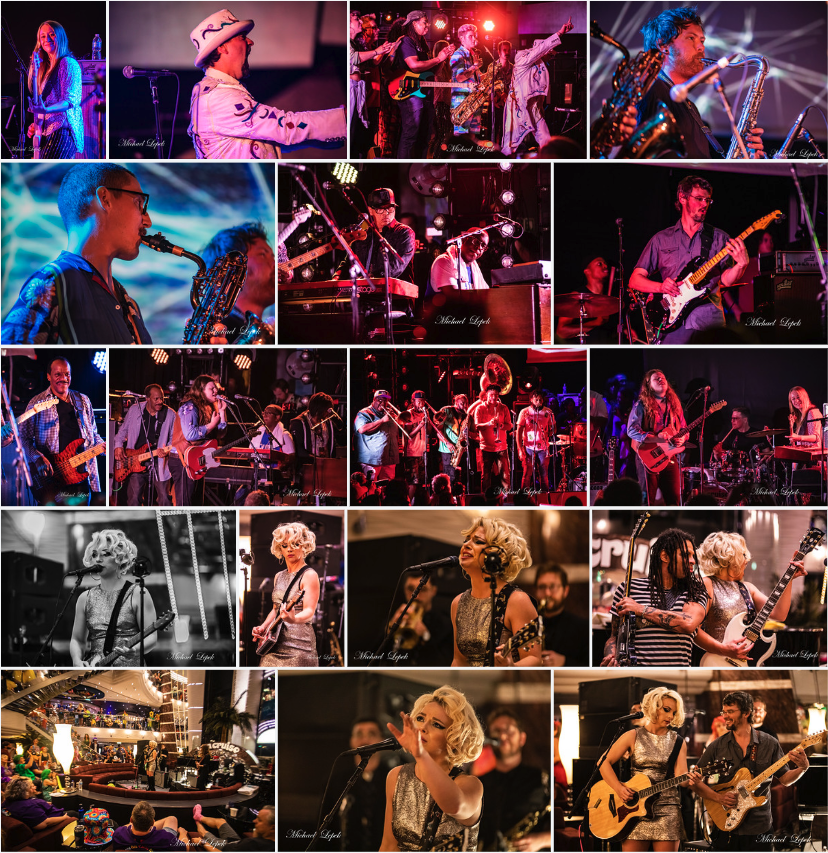 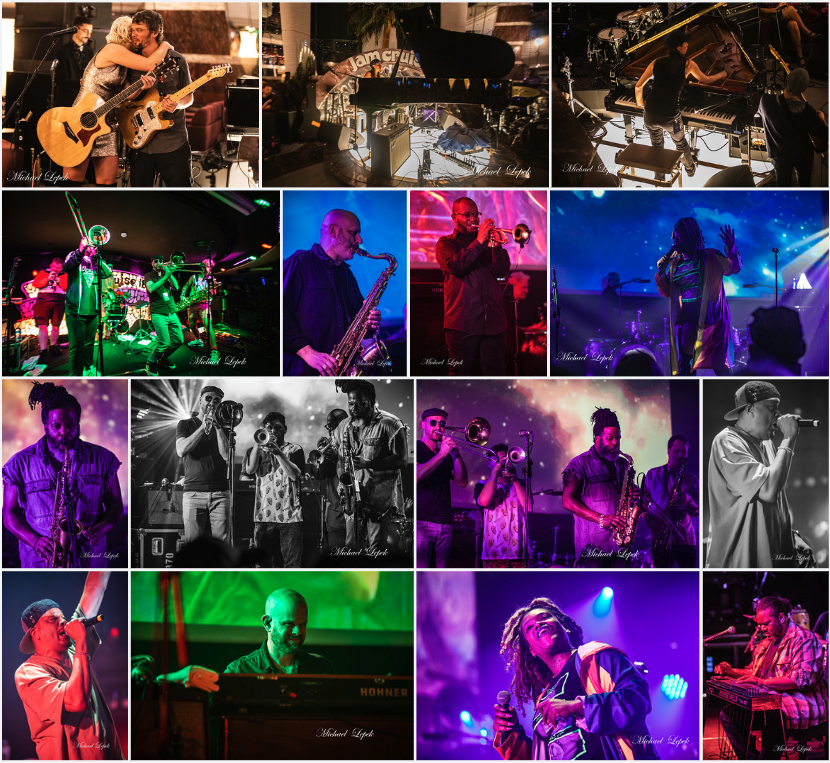