We've played it pretty close home with our Spotlight Shows until now, generally identifying an artist or venue that we've had some affiliation with to showcase.  Starting now we're going to try something new; we'll be featuring a few upcoming suburban shows that we feel great about giving an extra push even though we have no (present) relationship.

In this case, we love the artists so much and are so excited that they are making it to our neck of the woods, it just makes sense to give The Barn's seal of approval.  Plus, it'll provide a nifty excuse to roll out some fun, related content on the blog.

The first of these comes right in time for the Mardi Gras and features not one, but two, New Orleans musical institutions.

For nearly 35 years, Roger Lewis, Effrem Towns, Terrence Higgins and the rest of the Dirty Dozen Brass band have been bringing their swampy mix of second line brass band,  funk, and bebop to the world from their New Orleans home base.  On Saturday, March 5th, they join forces with Crescent City piano-man and soulful troubadour Jon Cleary at the MAC, (McAninch Arts Center) at the College Of Dupage in Glen Elyn. 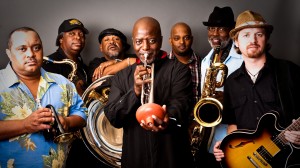 If you haven't been to the MAC, it's one of those rooms with nearly perfectly acoustic properties.  Intimate and made for music, you are as likely to catch vocal jazz, musical theater, or folk music as the soul and funk throwdown that will ensue on Saturday night.   The programmers there do mix it up, but when they reach for something exciting and break out of their mellower mood, they certainly go big - super-sizing this gig with two legendary acts and timing it perfectly around Mardi Gras. The Barn thanks them for bringing great music to the burbs.

Tickets start at $28 and can be purchased online at the MAC box office.

Dirty Dozen will celebrate the 25th anniversary of their classic album "My Feet Can't Fail Me Know" by performing it with a unique arrangement including banjo and dobro.

Jon Cleary opens the show and will join Dirty Dozen for their set as well.

Keep your eye out for more content about and the music of New Orleans at tomorrowsverse.com over the next several weeks.