It was with certain amount of amusement, and shameful delight, that I watched the "reviews" roll in for the Umphrey's McGee "Chicago tourist anthem" last spring.  Admittedly I was excited to hear a band that I liked pay tribute to the city I love, but the final product was a bit of a head-scratcher.

It ended up raising a number of questions.  Does Chicago really need an anthem and could a spec-song really motivate tourists to visit as well as the countless other songs sourced from the collective muse ?

The gears started turning... could I identify my choices for songs that truly capture the spirit of the city?  To make the list, they don't necessarily have to be about Chicago, or even mention Chicago, but surely an impressive mix could be made that really embodied the city's spirit -- what it's like to be inspired by, live in or visit, love or hate the city.

It is a testament to what Chicago is and represents that the mix I ended up with spans multiple eras, genres and artists.  Certainly it leans towards my musical tastes, but those are wide enough to include many varieties of rock (jam, indie, prog, classic), jazz, country, folk, hip-hop and, of course, Chicago blues.  So have a listen and a read and let me know what I left out in the comments.

The Barn's love letter to Chicago starts off with a song that begins as an actual letter to Chicago. Ryan Adams' "Dear Chicago" addresses the city and speaks of a woman that really can't compete with the city itself.  In typical Adams fashion it becomes haunting, even a bit unsettling before he finally declares "New York City's almost gone".

It isn't featured in many tourist materials but the city's South Side is vast and populated with many colorful characters. One such is Jim Croce's "Bad Bad Leroy Brown", one scary mutha who embodies the soul and bluster of some of the city's "unsung" neighborhoods.

Graham Nash's "Chicago / We Can Change The World" sends a bunch of mixed messages, but unmistakably takes the listener back to a time when youth were excited and engaged to challenge authority and make a difference, and the 1968 Democratic Convention was touchstone for the movement. Plus, it's got some great hooks.

Speaking of hooks, really catchy Umphrey's McGee songs are few and far between. Yet, they push all the right buttons, blending some nice simple melodies with their signature improg sound on "In The Kitchen", which refers to their home city in ways that are much more abstract and satisfying than the commissioned, forced tourism anthem "Chicago".

The Hold Steady's retro-progressive literary style evokes Chicago's great working class traditions, intellectuals, stockyards, and name checks Nelson Algren before devolving into utter incoherence in "Chicago Seemed Tired Last Night".  It's hard to deny Craig Finn's vocals, but credit goes to the band, who totally rock it out on this version from Lollapalooza.

Chicago Blues is well represented in the centerpiece of the mix. First is authentic blues by Jimmy Rogers on "Chicago Bound".  It's so damn genuine that a line like "Chicago is the greatest city around" which would crumble under lesser talent, feels utterly sincere and even humble in Rogers' hands. Texas hombres ZZ Top know how to tip the cap to the big boys, forever linking the city with the savior in the classic blues shuffle "Jesus Left Chicago". And this list wouldn't be complete without an appearance by the ultimate Chicago Blues song "Sweet Home Chicago". The only question is which one of the many high quality versions to select. My choice:  having already selected some authentic Chicago blues, I'm going with the iconic Blues Brothers cut. Why?  I can't help associating the quintessential Chicago song with the one of the greatest ever Chicago films.

Among the cultural icons that Chicago exports to the world, perhaps none are as prominent these days as rapper and producer Kanye West. Any controversy that he generates aside, there is no denying his talent, critical and commercial success and "Homecoming", with its imagery including "fireworks on Lake Michigan" really captures what it's like to come back after being away.

Growing up here, I'm not sure what classic rock radio in other cities is like, but the old WCKG used to love to insert Aliotta Haynes & Jeremiah's "Lake Shore Drive" into playlists throughout my youth.  The song contains a sweeping piano riff with bittersweet nostalgia for one of America's great thoroughfares, with a wink and a nod to "slipping on by on LSD".

Many consider Chicago to be the capital of the Midwest. As such, it is the first real metropolis (sorry, Milwaukee, St. Louis & Indy) experienced by those from the entire region. Merle Haggard's "Sidewalks Of Chicago" paints the picture of what it's like to be humbled and overwhelmed by the city, while keeping the some of the harsher realities hidden from those back home.  If you can make it here, you can make it just about anywhere (I'll admit, New York is it's own proving ground).

"Peace Frog" is truly a great rock song with an absolutely devastating line that references the city.   But, as somebody over the age of 20,  my fascination with The Doors is way beyond its expire date. Luckily, Widespread Panic has chosen to give this tune a try a few times in their career -- two of the three performances were in Chicago... 13 years apart (I was at both).

When the world was churning out incredible pop and rock music in the late sixties, Chicago wasn't exactly a huge source like it has been in subsequent eras.  We did however produce the Paul Butterfield Blues Band, whose most recognizable song was about being from here.  "Born In Chicago" is rough-and-tumble, racially mixed blues written, oddly enough, by a Greek guy (Nick Gravenites).

The remaining 48 states of his 50 states project have yet to materialize, but we're lucky to have a whole album's worth of Illinois-inspired songs from Sufjan Stevens.  Chicago is a big part of that, and I almost included the gorgeous "Casimir Pulaski Day" (whose title is almost like an inside joke for Chicagoans), but I opted for "Chicago", if only for the musicality and fluidity of the way he sings the song's title.

Was the obvious choice for a Wilco song "Via Chicago"?  Well screw the obvious, because while that song can leave the listener a little cold, there's nothing but love in "Far Far Away", about a loved one who happens to be far away from Chicago at the time. It also includes a turn of phrase, "Kiss and Ride on the CTA," that is just so Chicago that I'm just consumed with hometown pride whenever I hear it.

We've gotten this far without nary a song that reads like a laundry list of landmarks or the city's qualities.  It's not a rock song, but there is one tune that fits the bill and still needs to be included. Frank Sinatra's "My Kind Of Town" has an undeniable swagger that still resonates all these years later.  "Each time I leave Chicago is pulling my sleeve."  Indeed.

Bonus Track (Spotify & MOG only) Old Shoe is a rising Chicago jamband and friends of The Barn.  Their tune "Ohh Chicago" earns a bonus spot here as an earnest, unabashedly jammy ode to the city with a nice pop sensibility.  I'm happy to use the bonus slot here to introduce them.

Dishonorable Mention (Grooveshark only)  This one was a roller coaster ride of emotion. When I found out that my favorite band, Phish, debuted a song at a hometown show (which I had to miss) named Windy City that's (presumably) inspired by the city, every nerve center of my brain was activated.   Upon finally hearing it, I can't describe whether I was elated, disappointed or angry that the song turned out to be maudlin and kinda terrible.  Thankfully, they left it out of the eight sets they played in and around Chicago over the next two years. Now every subsequent Chicago show has to be entered with fingers and toes crossed that the band doesn't remember this stinker. 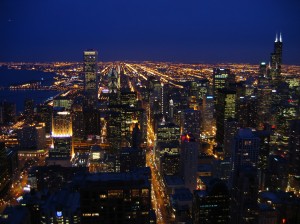