Saturday night's show had a little of everything we love about Mr. Blotto: some old chestnuts and some newer jams, some tunes that felt squeaky clean out of the rehearsal room and a few numbers that seemed spontaneous and fresh.

Brixie's provided an exceptional venue  and a was fine gathering place for the first Barn Presents show of 2011.  Some fans recalled less-than-stellar service at Blotto's last visit to the area, but the staff at Brixie's were nothing if not hospitable, with the bar staff working feverishly to keep the fans sated and happy.

Strawdaddy opening the evening with a strong set, using Blotto's sound system to their full advantage. Pete Hammon's lead guitar was clear and up-front in the mix while Trevor McSpadden's vocals was both commanding and emotive.

2: Over and Back > Used to Know, Happy Birthday, Lively Up Yourself, Keepin' it Up, Kiss Me in the Morning > Rap > Peter Today,  Crossroads, Big Enough >Movie Star, Help on the Way> Slipknot> Franklin's Tower

After kicking the show off with a slinky and brooding "Organ Grinder", the band made a good run of tunes from Bad Hair Day flow around a take on (birthday boy) Bob Marley's "Rastaman Vibration" (which blended seamlessly with a few bars of the Dead's "Estimated Prophet" before winding down).    The Dead's songbook would make a full appearance later in the set, with Mark Hague's wonderfully bright guitar tone ringing through nicely on "China Cat Sunflower", after an extended improvy intro.  A jammy "Indiana Jones" closed the first set and sent the crowd out into the crisp night air for a little "breather." 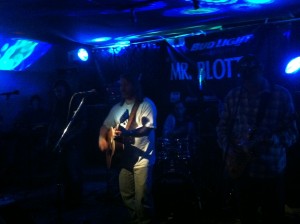 Well past midnight and officially into Bob Marley birthday territory by the time the second set kicked off, the band actually ran through a dissonant "Happy Birthday" a couple of tunes in before kicking out a crowd pleasing version of "Lively Up Yourself".  The meat of the second set was built around the pairing the gospel fueled "Keepin It Up" with the sweet strains of "Kiss Me In The Morning", featuring a mellow jam that led to a Paul Bolger rap which included shout-outs referencing the recent blizzard, the impending Super Bowl match-up (and the absence of our hometown Bears), and the "190 beers" available at Brixie's. 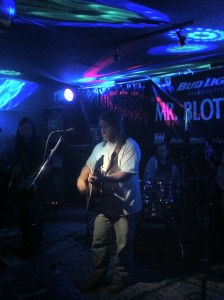 With jam-loving fans still holding out til the end, the band stretched out on Phishy-grooves of their own "Movie Star" and the set closing triad of "Help On The Way" > "Slipknot!" > "Franklin's Tower".  While "Help" and "Slip" may have seemed a bit hurried and clipped, the band decided to stretch out on "Franklin's", adding plenty of uniquely Blotto interpretations to the verses, to send the satisfied crowd into the night at about 1:30 a.m.

A special thanks to taper Kelly Casey (aka cosmickc) for recording and uploading promptly to archive.org.