This morning, the always provocative @yemblog #yembconvo posed a simple, but interesting question.

While looking at the invdividual answers is enlightening, the aggregate is truly fascinating.

Using a simple methodology -- assigning 4 points for the most important, 3 for second place, 2 for third, and 1 point for least important -- I summarized 45 responses and came up with the following insights.

Sorry, Dick's, with only 83 Importance Points, you've been deemed the least important Phish event on the calendar. 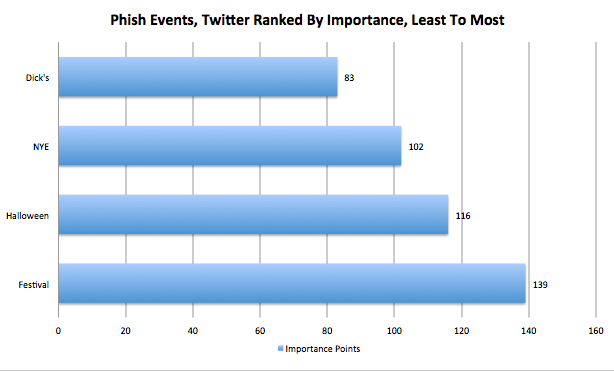 Not only that, but it also received the most amount of 1 votes, with nearly half of all tweets ranking it as the least important event.

By contrary, Festivals seemed to get the love, garnering 20 of a possible 45 first place (4) votes.  Halloween had both the most 2's and 3's, where NYE was the most evenly distributed.

Number of Votes Per Event

With four possible rankings, there are mathematically 24 possible permutations -- 19 of these were covered in the 45 sets of votes cast.  So, while there are winners and losers, there is certainly no consensus.

Methodology note:  Only tweets that ranked all four events were counted.