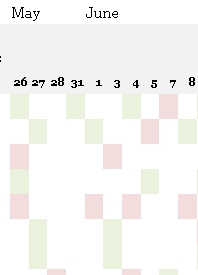 Woe is me.  I can't stop thinking of new ways to visualize the information we have about Phish tour.  Luckily, the lengthy tour that they completed last week has provided plenty of data from which I could cultivate stupid facts and shape into interesting charts and graphs.

Looking at the graph as a whole gives an idea for the frequency of the most commonly performed songs.  Work your way down and you can get a feel which songs were concentrated in leg one or leg two and which were more evenly dispersed.  Go all the way down to the bottom of the model and you can see a map of all the one-timers performed over the course of the tour and where they appeared in the setlists... pretty cool.

There were 787 total songs performed at just over 6197 minutes of music.

Additionally, I have updated the visual song charts which debuted after leg one of the tour.  As a reminder, you can sort this alphabetically, by frequency or average length.

Got any other strange tour facts that you'd like to see?  Let me know.