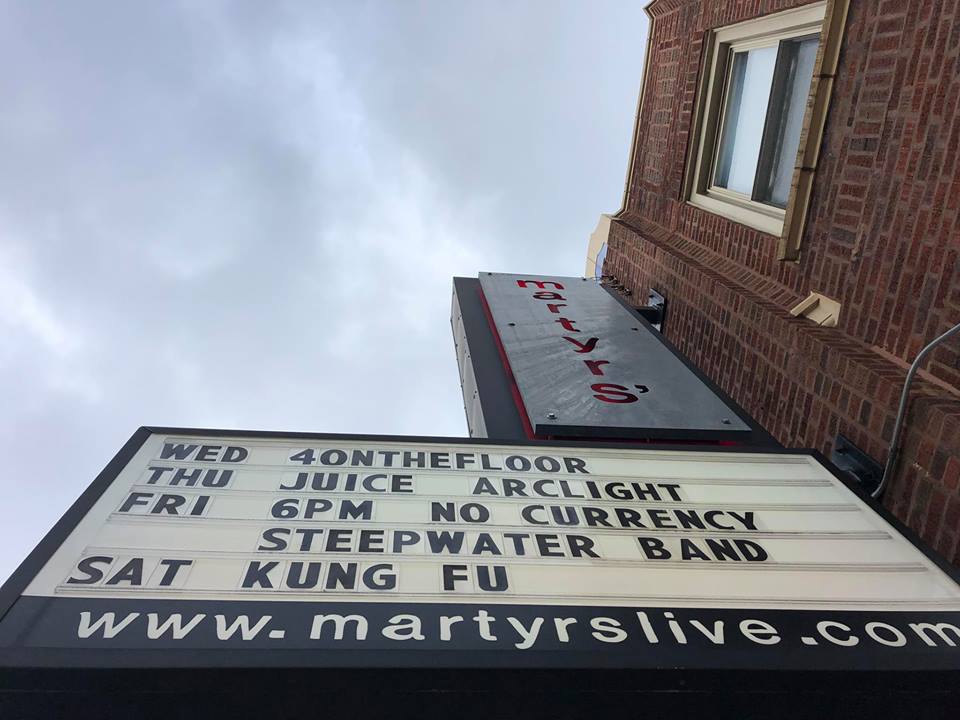 Kung Fu have become perennial visitors to the Chicago area, and their loyal local fanbase packed Martyrs' on Easter Eve for a fantastic show full of extended jazz-inspired solos, danceable favorites, and straight up heavy grooves.

It seems the band and venue have worked out a mutual attraction, as their regular spring visits have created something of a home-away-from-home feeling at Martyrs'.

It was my first time seeing the group with Beau Sasser on keys.  I thought he did a great job of filling the spaces with appropriate synth/organ playing, mostly laying down the bed to build Tim Palmieri and Robert Sommerville's solos, but still shining through at moments.

The band’s instrumental excursions are usually the focus, but they worked in some tight 70’s funk harmonies, with Sommerville providing some hip-hop inspired vocals as well.  The Headhunters' "God Made Me Funky" and an holiday-appropriate take on "Jesus Christ Superstar" were covers that exploited this strength.

They really maneuver through the worlds of groove-based music and outstanding technical musicianship with expert efficiency.  The mix never comes across as forced, primarily due to the patience and timing of their amazing rhythm section. Chris Deangelis’ fat bass tone pops through the mix at all times, front and center, while still providing the ensemble some structure.

On this night, the band introduced a new Tim Palmieri song, a slow mellow jazz burner whose melody was counteracted with a deep backbeat. The down tempo song allowed the build to happen naturally, and showcased Palmieri’s rapid-fire shredding.

His playing definitely draws from the Jimmy Herring camp of rock-based jamming -- bringing a diverse background in music theory to bear on some unhinged creativity, using the six-string to explore the tunes and build to crowd-pleasing peaks.

My favorite solo of the night had to be Adrian Tramontano’s closing drum solo. The band and lighting designer gave Adrian center stage, for nearly 5 minutes of intense, energetic, virtuosic playing. He kept the song’s quick pace for impossibly long, before moving to different feels that incorporated all four limbs simultaneously implying different rhythms. One giant fill later, the band hopped back into the end of the tune with a complex line maneuvering around the beat -- ending on an outstanding display of group tightness.

A relatively new Chicago-based act, Groovy Louie and the Time Capsules, opened up the evening with their take on the psychedelic, jam-based funk that is Kung Fu's calling card.

Despite their name, they strive to move beyond the funk label, incorporating bombastic changes and exploratory improv throughout. The set never got stale, as they mixed things up really well. The addition of a horn section brought the melodies of their compositions to life.

Their more complicated parts showcased the group's ability to move together as one, and the improvisation was no different. Not afraid to build tension and get weird with it, guitarist Arnie Kolligris and keyboardist Jordan Nettgen, expand on the harmony in exciting ways.

The dense chordal interplay was really held down by the extended grooves established by the brother rhythmic section of bassist Jeff Paolino and drummer Jesse Paolino.

The band just released their debut EP which incorporates their tongue in cheek lyrical take on the genre. They’re a great local band in the ever-growing Chicago jam scene.