The best Super Jams are representative of what can be achieved on a whim when you mix together the right ingredients --  classic songs performed by some of your favorite musicians in a truly collaborative setting.  While the concept was just getting its legs for its first installment this past winter, the Abbey Pub was packed to the rafters from the first note of Full Court Press 2 in April, especially given the certainty of local jam scene royalty in attendance.

The scene was wild and festival-like.  Numerous flyers told me to vote for some guy dressed in a Lebowski get-up for Summer Camp Counselor.  I thought that was a good sign and ordered a White Russian.   A rare pre 10 o'clock start time ended up extending way late, five bands later after 1 a.m., and continued  for me at Carol’s til four observing friends “Bust A Move” with a little karaoke.

The night was divided into 5 different bands, mixing and matching the lineups of Chicago's best and most open jammers.  They tackled a handful of classic rock, funk and jazz covers as well as a couple of tunes that I just couldn't place.  With several songs clocking in at well over the ten minute mark, there was certainly no skimping on improv, despite the relative freshness of some of the lineups.

Band 1 Setlist: Two unidentified songs, though one sounds suspiciously like a Strange Arrangement song (not surprising given the personnel), and a huge rendition of Bob Marley's "Get Up Stand Up"

Band 1 Highlight: The aforementioned Marley tune was sent into the stratosphere before returning back to the trusty reggae grooves. Band 2 Setlist: Debra (Beck), One and Seven (Soulive), Jam, Up On Cripple Creek (The Band)

Band 2 Highlight:  Joe Day’s vocal range on “Debra” was on full display.  I may have witnessed panties flung toward the stage.  Old Shoe just busted out this awesome cover of Beck off his Midnight Vultures release.  Check this Ace Bar version out.  Also fitting was the groups choice to pay tribute to a great one in Levon Helm with “Cripple Creek”. 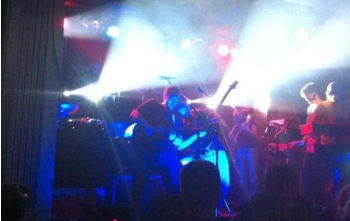 Band 3 Setlist: Shape I’m In (The Band), Stratus (Billy Cobham), Get Down On It (Kool and the Gang)

Band 3 Highlights:  Conry sang spiritedly with another The Band gem in “Shape I’m In” as Janis Wallin attracted the usual amount of notoriety for her prowess on bass and vocals.  Excellent, fun song choices all around.

Band 4 Highlight:  Can I say anything here that can explain the power of this lineup?  You. Just. Need. To. Listen.  Okay, well Marcus Rezak is rigawdamndikulous, plain and simple.  Combine that with UM members freshly amped off a secret concert earlier in the day and you get some leeengthy jams that were simply stunning.  Before listening to this stream, be sure to have a change of underwear handy.  Just in case.

Band 5 Highlight: Loved me some Meters “Look-Ka Py Py” which showcased the funky FGC  bassist as well as Strange's Joe Hettinga dazzling with some nifty keys.  Rezak continued his prowess, especially on the closing jam that just didn't seem to want to end (clocks in at over 16 minutes), but Conry tore it up on some crazy guitar solos, too, leaving the crowd breathless, sated and sweaty.

The next Full Court Press will be back at the Abbey on August 2 as a pre-Lollapalooza warm-up.