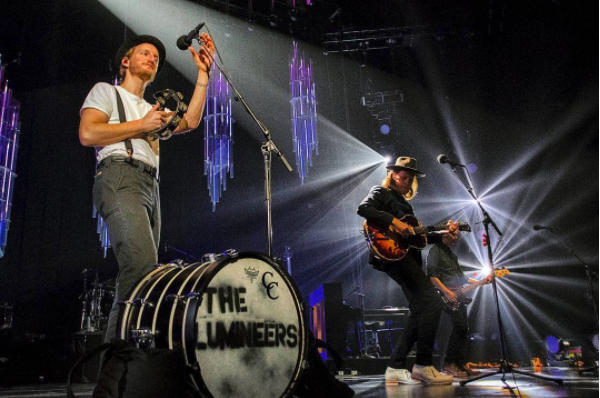 Despite only having two albums to date, The Lumineers have had an undeniable influence on today’s indie scene, gaining a massive following through the infectious simplicity of their folk-rock songwriting.

Their popularity was especially visible at their recent concert at Rosemont’s Allstate Arena, where the band played to an ecstatic crowd in support of their newest record, Cleopatra.

The band played into their strengths with an energetic performance and a carefully constructed setlist, opening with a run of their most popular songs, including “Ho Hey” and “Cleopatra,” all within the first 15 minutes of the show.

An interesting move for a band whose popularity is largely derived from the success of such singles, the choice to move these songs to the beginning of the set kept the audience guessing as to what would come later.

Singer Wesley Schultz’s melodic songwriting remained the focus, and he often addressed the massive audience in a humble, sincere tone, as when discussing his father’s death before the song “Gun.”

Following the anthemic “Dead Sea,” the band moved through the audience to the center of the floor, a stage rising from the ground to offer a smaller, intimate feel in the arena.

Here, the band members rotated to face different sides of the audience, performing stripped-down versions of four songs, three from the band’s self-titled debut and “Where The Skies Are Blue,” a recent b-side.

The band returned to the main stage for the remainder of the set, which focused heavily on material from Cleopatra, ending with album closer “Patience.”

With 17 songs already behind them, the band returned for a triumphant encore, again designed with expertise, opening with a stripped-down, solo version of “Long Way From Home.”

The band then invited opener and Chicago favorite Andrew Bird to the stage for a cover of “Subterranean Homesick Blues,” which not surprisingly turned out to be the hardest rocking performance of the evening, before closing with “Stubborn Love,” from the band’s debut.

In the end, The Lumineers managed to avoid falling into the trap of predictability in a set full of surprises, the individual members seeming as earnest and straightforward as the songs they have created, both justifying and demonstrating their continued success.

Download or stream the entire performance (via WXRT's broadcast) below.