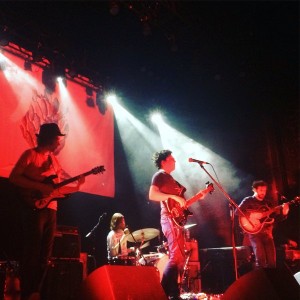 I’d be lying if I said I wasn’t skeptical going in to White Denim’s Thalia Hall show on Saturday.

My last two White Denim shows, during their 2014 tour, both took place in venues in the 200 and 500 capacity range. This, combined with the band's new lineup, gives reason for a longtime fan to think, or possibly overthink, what's to come.

Yet I arrived at Thalia Hall (capacity 1,300) fully optimistic. White Denim singer-songwriter James Petralli hadn’t let me down yet and, as of now, there’s no reason to think he ever would.

The band’s newest record, Stiff, was undeniably simpler than their last two, but shared a new R&B-influenced vibe that I was surprised to love, and fit the new compositions well.

And with a new lineup and a new album to promote, I expected new material.

White Denim appeared on stage as a five-piece, the fifth member behind a keyboard to the side of the stage, but armed with a number of additional instruments.

The band opened with “Real Deal Momma,” amongst the best songs from Stiff and arguably the most similar to their previous albums’ style. Featuring Petralli’s distinctive and rapid vocal delivery over a crunchy guitar riff and vigorous rhythm section, the song served as a blistering opener, utilizing the larger band while paralleling the energy from past shows.

The track featured a spacey jam at its finish that outdid its studio counterpart, exactly what White Denim has always done best.

The band used the beginning of their set to practically give the audience a tour of the new album, running from “Ha Ha Ha Ha (Yeah)" to “Brain” to Stiff-closer “Thank You.”

While “Ha Ha Ha Ha (Yeah)” served as a fun track, the latter two featured the true highlight of the new live songs, with the band using a trippy transition to link the two. 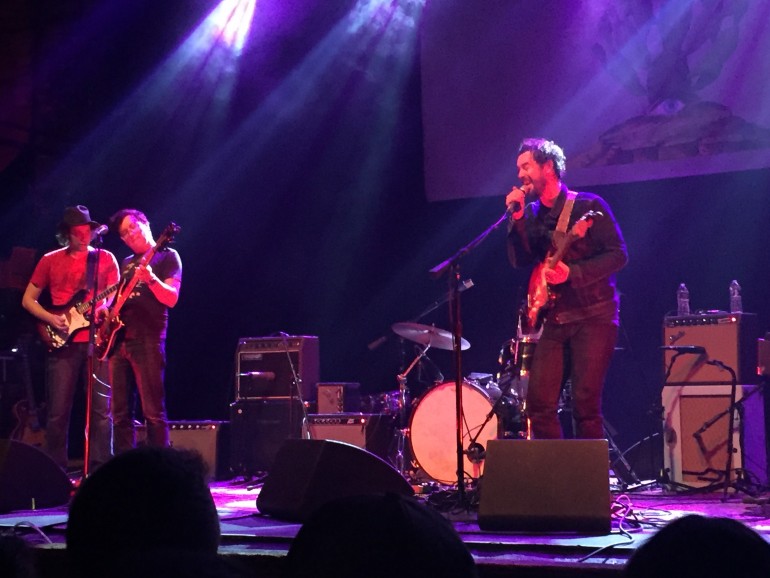 The band continued to transition between songs throughout the night, a necessary aspect of any White Denim show. “River To Consider,” already an intense jam in and of itself, featured an ambient outro leading into “It’s Him!,” feeling as though the band were proving their ability to still deliver songs from 2011’s D. (With that said, Petralli handled the guitar work on the obviously difficult “River To Consider.”)

Led by Petralli’s falsetto, the band ripped through the D tracks, the additional stage persona only assisting in filling the large venue with sound. Even after dramatic change, White Denim clearly remains amongst the best live shows around.

But never were the new album’s merits better than “Take It Easy,” Petralli’s soulful side providing a new avenue down which the band never traveled prior. The song’s sexy groove was augmented by a number of instrumental sections, ending in a gigantic, riff-based climax.

Though “Anvil Everything” lacked some of the intensity the song used to have live, “I Start To Run” more than made up for it, a quick transition leading to the fun, upbeat track from the band’s 2009 album Fits. With an energetic closing jam, the song reminded me that White Denim were more of an idea than a set lineup, leading me to forget momentarily about the recent lineup change.

A run of short, transitional songs ensued, with the psychedelic “Limited By Stature” leading into the garage-rock styling of “I Can Tell You,” both appreciated additions for longtime fans. 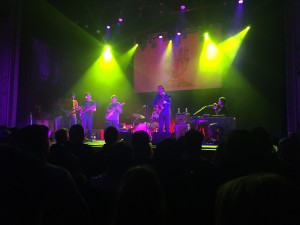 The trippy “I’m The One” followed, its spacious composition leading to a surprisingly noisy outro, returning to repentant riffs throughout and, again, out-doing the relative studio track. Quite simply, the new jam proved epic in the live setting.

For me, the most apparent change in White Denim’s sound came during Corsicana Lemonade’s “At Night In Dreams,” a song featured relentlessly in the band’s setlists since its release in 2013.

The change was neither for the better or the worse. It was simply there.

What used to be a fairly simple jam based on lead-guitarist Austin Jenkins’s stellar psych-rock riff has become something far bigger, based on no sole member but the band as a whole. The song sounded huge, with the guitar tone leaning toward metal and the keyboardist offering another layer of harmonic noise atop the already scorching track. Petralli took the chorus’s solo, perhaps as a nod toward older times.

Each song is, after all, a blueprint that White Denim can alter. Just as the group’s dynamic changed with the addition of a second guitarist in 2010, the band has entered another transformation in 2016.

But in the end, all that matters is that the songs still rock.

The band invited opening band Sam Cohen onto stage for the encore, a collaborative performance of a medley of Prince covers.

Beginning with the immediately distinguishable spoken word vocals of “Let’s Go Crazy,” the 9 band members slowly built up to a conservative version of the Prince classic, the keyboardist essential in completing the dance groove as Petralli and Cohen trade vocals. The band let the audience scream, “Oh no, let’s go” as the chorus completed.

The band then transitioned into “Controversy,” still handling the cover with respect for the recently deceased musician. Chugging guitars and thumping bass kept the song moving as synthesizers and guitars eventually traded solos, the band using the song’s funky backing as an opportunity for a final, creative jam ending on a momentous finale utilizing Cohen’s screeching guitar.

Similar to the overarching vibe of Stiff, the band was clearly having fun. And even if some of the technical proficiency of earlier songs is lost on the new ones in the studio, the band seems to be putting extra effort into transformative jams and transitions live, keeping the songs’ fun vibes without dumbing them down to identical performances night-to-night.

The lineup changed, but the band’s intrinsic values remained the same.

Read the setlist and watch videos of “River To Consider” and the epic Prince encore below.

And for good measure, here's the remainder of the Prince medley as performed in NYC: