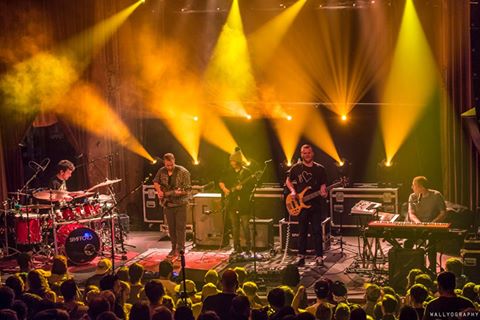 Ryan got a preview of this pairing's Chicago tour stop in Colorado.  For a chance to win a pair of tickets for Saturday's show with these two bands, check out our CONTEST PAGE.

One of Denver’s premier venues.

A sold out show.

That combination doesn't come easy, especially when these bands have had limited Colorado exposure to date. However, there was palpable energy surrounding this billing, with Mungion blowing minds with their progressive instrumental excursions, and Spafford bending them with patient, exploratory improvisation.

Both groups rounded out the other’s sound and created a fun atmosphere that amplified the care-free April Fools vibe of the show.

Chicago’s own, Mungion, kicked off the festivities with “The Opening Song”, a goofy number, written that afternoon, which had the band asking the crowd which song they were going to play. The band's personal enjoyment was transparent, enjoying the capacity crowd as they launched into “Casual Titus”.

Perhaps a few shows with Spafford, a band known for loose, go-anywhere jamming, coupled with the chilled out Colorado crowd, led Mungion to take a step back and get a little more free with their improvisation. That seemed to be the case on Saturday -- with no shortage of intense and intricate compositions, the contrasting openness and interplay of the jams was a really good look for these guys.

The set was full of their heavy hitters, including “Schvingo” with a reprise at the end, “Makanda”, my personal favorite due to the bluegrass inspired guitar sol.  They even included what could be a radio single (if the radio would play complicated music): “One Night Stan”.

A vocal jam followed “My Darling Troll”, one of their most bombastic and jazz-fusion inspired instrumentals. Adding a humorous tint to a Snarky Puppy level of tightness was refreshing to see, as the amount of work and musicianship it takes to be able to play these tunes might leave some performers jaded.  But the Mungion guys still brought their aggressive-progressive, high-minded music with a light hearted attitude.

The bar was set pretty high for Spafford, with a very packed house of dedicated fans. Opening the night with “Mike’s Song” seemed like a really bold move, but they quickly abandoned it for “Backdoor Funk”, an clever April Fools prank, and a smart play that got the whole room on their side.

Plenty of feel-good funk grooves evolved very naturally throughout their jams. Dropping to low volumes and really taking their time to let peaks get there on their own, is Spafford’s bread and butter.

The first set was punctuated by a great sit in from guitar prodigy, Jaden Carlson, a local who has managed to sit in with some of the best in the scene. The 15 minute “All In” was definitely a highlight of the night.

The second set got far deeper, as they took on some electronic sounding house elements. Layering guitars and synths over the completely steady grooves allowed the band to keep expanding and building.

If you’re a fan of long Type I build-up jams, Spafford might just be the band for you.

The full second set was one big segue from “Palisades” to fan favorite “Electric Taco Stand”. Ending the set with the feel good rocker “Leave the Light On”, left the whole crowd satisfied.

There was a prevailing Phish vibe throughout the night with Mungion taking over the early 90s tight, written out compositions, and Spafford rocking the spacey late 90s jam. Both bands brought a jovial sense of humor (Spafford posted the night's setlists to Facebook as March 32nd), and connected well with the crowd.

Unfortunately, some sound problems persisted through both groups sets, which occasionally took me out of what was otherwise a phenomenal jam-rock show.

SET ONE: Backdoor Funk*, People, Minds Unchained, Parody > It's a Bunch, All In^, Beautiful Day