Once again, The Barn turned up the heat in La Grange, transforming The Mambo Room into an island paradise on a chilly Winter night.  Combining The Ark Band's dramatic backdrop with The Barn's full scale light show, the crowd got a chance to leave behind the outside world and let the power of reggae music provide a little mood elevation. 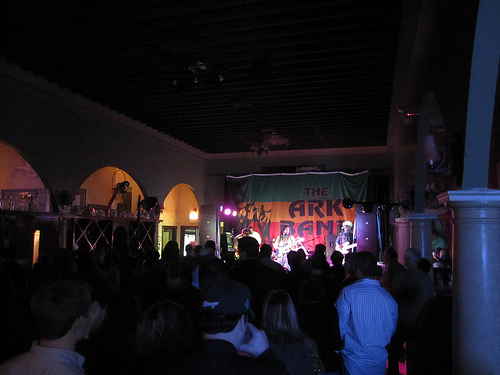 The sound was absolutely dialed in from the beginning.  Three songs into the show, we got our first taste of Marley on his birthday, as the Ark Band cranked out a riff-filled and rollicking version of I Shot the Sheriff that clocked in at almost 9 minutes and got the crowd totally locked in with the performers.

The band used that focus and energy to segue into their sonic secret weapon, the exotic and uptempo rhythmic assault of soca music.  The dance floor was packed and moving en masse as some fans seized this opportunity to throw down and boogie.  Who knew that the people of La Grange could move like this?

By the set's end, the band introduced their friend Evan from Jamaica as a guest drummer and Terry Bobb took center stage for some shared lead vocals on a set closing take on Stir It Up (with a little reprise of that infectious I Shot The Sheriff lick to send the crowd into the set break). 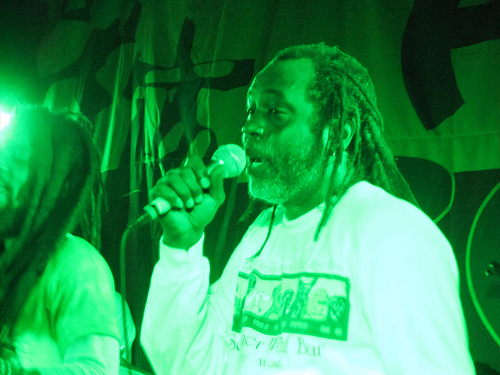 A short time later, the band returned to deliver a set which had most folks believing that the Ark was the Energizer Bunny of reggae bands, cranking out nearly two hours of music for their second act.

Set two continued the Caribbean party, but also hearkened back to some of The Ark Band's rock and pop influences, interspersing some choice covers into the mix with some reggaed-up versions of Men At Work's Land Down Under, Eddie Grant's Electric Avenue, Steve Miller Band's The Joker, and a clever take on Marc Cohn's Walking In Memphis, recast as Walking In Kingston.

Inevitably, we also got treated to a little reggae style Happy Birthday.  Of course, for Bob Marley, but also for Friend of the Barn Mike Neagle, who was in attendance celebrating his special day with family and friends (though we hear he was in the can for his on stage tribute).

Maybe so Bob didn't feel overlooked, the band cooked through even more Marley tunes in set two, featuring Three Little Birds, Jamming, No Woman, No Cry and ending the show, as as the rest of the band broke their gear down, with a moving, soulful rendition of Redemption Song with just guitar, keys and vocals.

Exhausted from a long and fun-filled night of music, the remaining crowd engaged with the band, slapping high fives, exchanging hugs and taking advantage of photo ops.  You've got to hand to these guys, they are super photogenic and love to play it up with smiles for the camera.

I'd say we did the spirit of Bob Marley proud and in doing so brought a lot of joy to the crowd.  Amid shouts of "Rastafari!" and lessons about the holy herb, we were able, in our little way, to continue to his legacy,  remember his message of unity, and celebrate the incredible music he gave to us in his short time here.