A capacity crowd was treated to a wonderful night of folk music when Elephant Revival brought their unique style to the intimate Gary and Laura Maurer Concert Hall at Old Town School of Folk Music.

While I have had the pleasure of seeing this collection of talented musicians before, my companions -- my fiancé and my future mother and father-in-law -- have not.  The whole evening was like a blind date that went marvelously perfect.

My previous times enjoying this group has been at outdoor festivals or more bar-like venues.  This beautiful setting was like picking the perfect restaurant for the first date.  The band fit the location like a glove.

You can just feel the vibe of how sacred music is when you walk into the Old Town School of Folk Music, and you can tell the members felt and respected it as well.  Even mentioning in awe the previous performers who they saw signed their names on the green room's walls.

But like any blind date, there is the awkward first moment, and that was when Dead Horses were announced as the opener.  The announcement caught me by surprise and I was initially a little bummed that there would be less time for the main course.  But I could not have been more off the mark.

The strangely named Dead Horses consist of frontwoman and songwriter Sarah Vos and stand-up bass player Daniel Wolff.  On this tour they are being accompanied by mandolinist Ryan Ogburn.

Their music and then charm won me over instantly.  Their 30 minute set was highlighted by the sensually moving original "Peace My Soul" and a delightful cover of Neil Young’s "Harvest Moon". Elephant Revival’s Charlie Rose accompanied on pedal steel guitar.

Apparently these two bands travel and play together quite a bit, and you can tell the friendship is tight. Although, with a smile, Vos did threaten that they would eventually steal Charlie for their band….  I would like to hear the story behind the rather unpleasant name, which feels polar opposite from the gorgeous music that this Milwaukee trio produced.

And just like the perfect appetizer, they set up the entree perfectly, and we were not disappointed.

If you have not seen Elephant Revival before, it is hard to know what to expect when the players walk on to a stage that is literally overcrowded with instruments.  There is barely room for them all to move as they walk on stage as though they just left the Renaissance Fair.

However, both Bonnie Paine (lead singer and multi-instruments) and Bridget Law (fiddle) abandoned the peasant dresses and came out in more beautifully formal gowns.  Once all settled, they opened with the quiet "Will Carry On".  It’s a nice mellow introduction to the band and first chance to experience Paine’s extremely unique voice.  She also is a mean whistler!

"Birds and Stars" followed, and the true nature of the band with it.  Their ability to start as this quiet little folk band, while slowly building into a bundle of powerful sound  is truly special.

Is it the pedal steel? The fiddle? The thumping percussion? Bonnie’s washboard?  It’s all and none.  It’s the combo that has your attention moving from one spot of the stage to another.

Next was the first instrumental, "Reel Mckay". They do a handful of these  - my favorite being "The Pasture" - and while I would describe them as a full band piece, these songs are truthfully Law’s babies.  She leads and shines in each and her skill is on full display during these jam sessions.  They bring me back to visits to the music found in the country pubs of Ireland that I have been lucky enough to enjoy a number of times.

Over the next 40 minutes we got to watch this “family” of musicians interact smoothly and flawlessly as they traded vocals, instruments, and smiles.  Charlie and Dango Rose constantly switch back and forth with the bass.  You'd think Bonnie and Charlie are staging a competition to see who can actually play the most instruments in one sitting.  Between the two, they covered pedal steel, banjo, mandolin, electric bass, washboard, djembe, stompbox, electric cello, and the most unique of all, a saw with a bow during "Season Song".   Daniel Rodriguez took the vocals on this one, while Paine filled the room with the haunting sounds of a musical saw.  Definitely a must see.

The highlight of the show came late with an absolutely amazing cover of Pink Floyd’s "Have a Cigar".  Bonnie prefaced it by saying, “Pink Floyd were originally folk singers, right?”

It's an endearing quality of this quaint band.  All members interact quite a bit with the audience -- bringing the atmosphere and emotional level in the small room to a collective euphoria during moments like these. You simply have not heard "Have a Cigar" until you have heard it played with a banjo and with Paine’s exceptional vocals.  I personally will never be able to listen to that song the same way.

What dinner date is complete without dessert?  Tonight’s was especially sweet in the form of this sextet's encore -- actually tranforming into a septet. The newest member of the band, Darren Garvey, masterfully handled the percussions all night.

He is a Chicago local having lived for a time a few blocks from the Old Town School of Folk.  The treat came in the form of his adorable daughter who couldin't have been older than four or five years old, yet who joined the band on stage for the sing-along "Grace of a Woman".  She bopped, sang, shook a shaker, and left everyone attending the show with a big smile as we walked out thoroughly stuffed with music.  Quite the cherry on top. 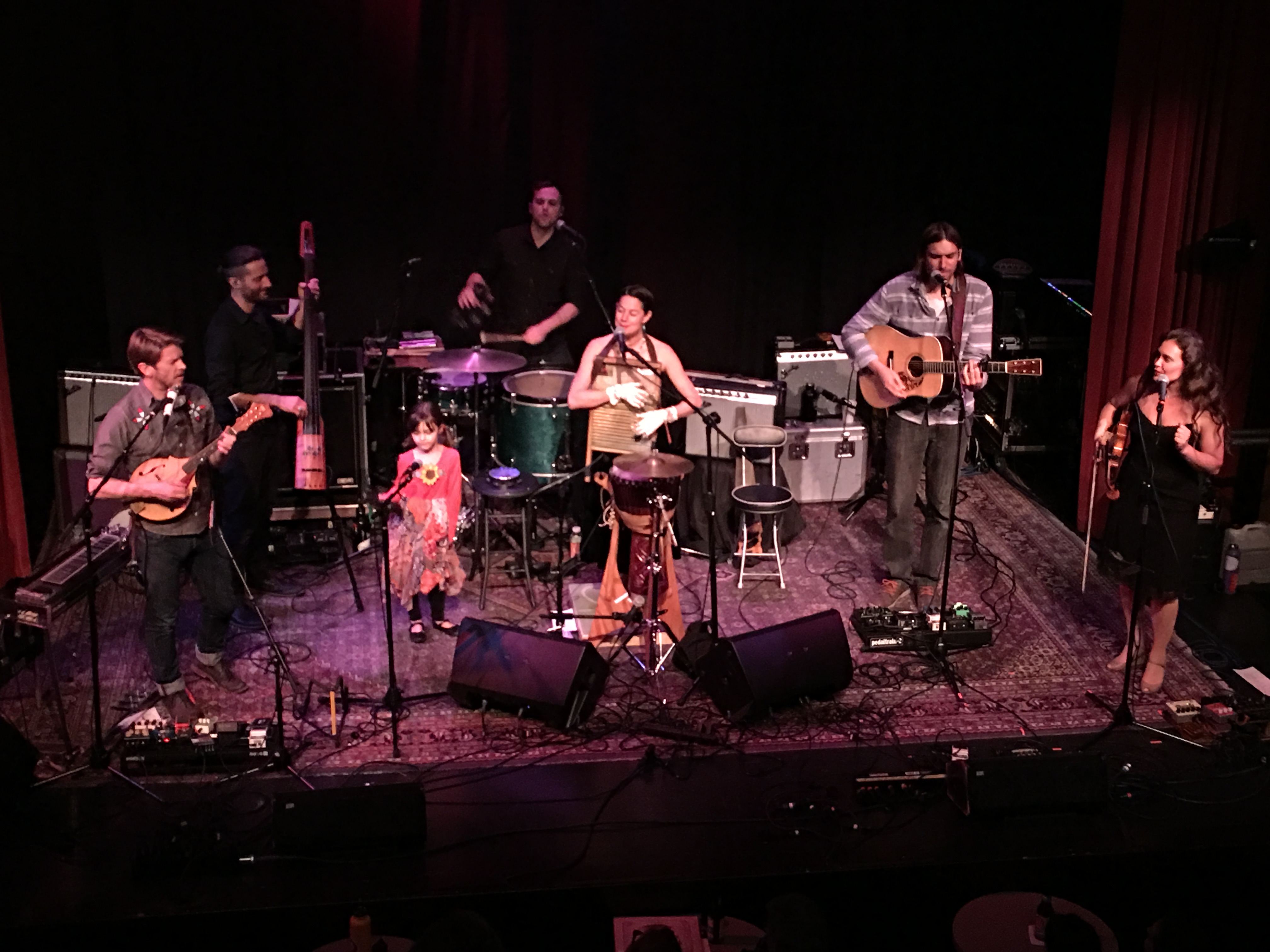 All in all, a great night, and according to my three companions, a very successful “blind date.”  There will be a second date the next time Elephant Revival comes to town.