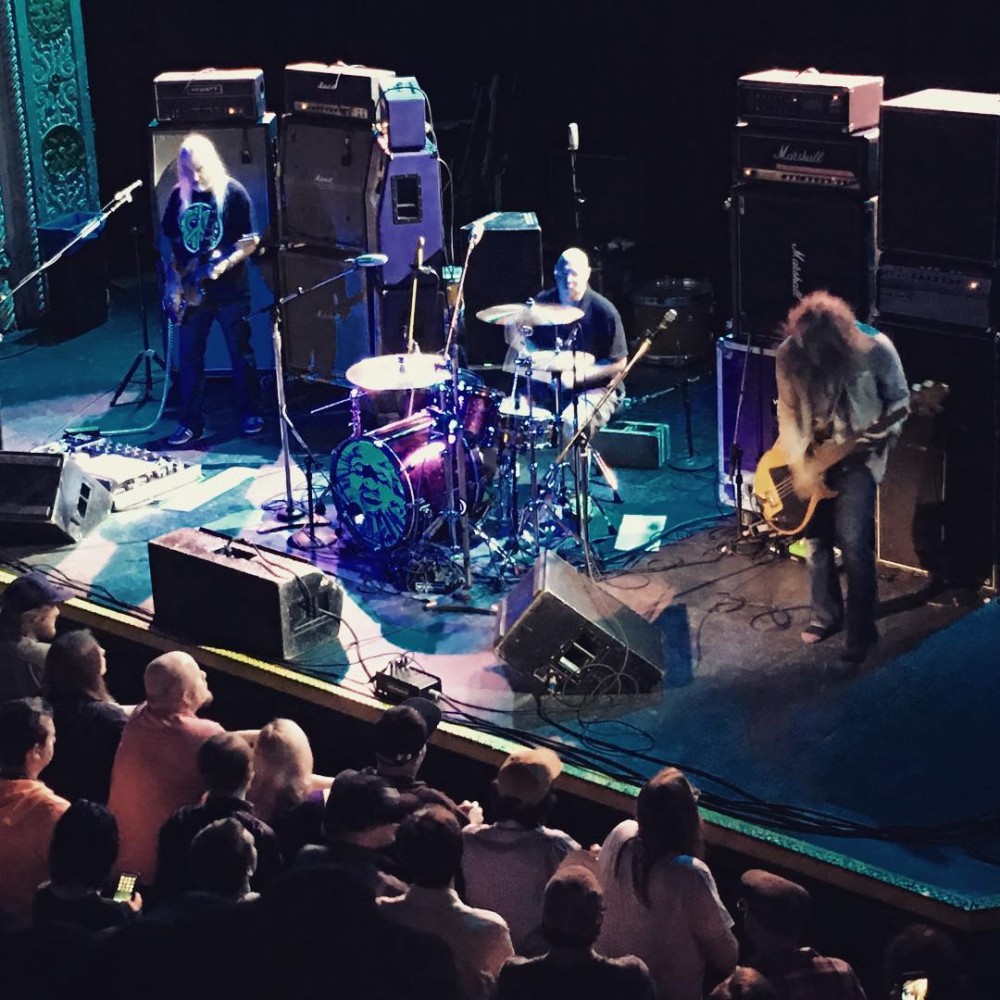 Dinosaur Jr.’s influence on alternative rock and the current state of music couldn’t possibly be overstated.

Combining classic rock and punk with distinct quiet-loud dynamic jumps, Dinosaur Jr. perfected the musical style that would characterize the 90s years before the Pixies or Nirvana even existed, paving the way for alternative and indie rockers for decades to come.

The band’s recent sold-out performance at the Metro perfectly exemplified the long musical journey they traveled since their formation in 1984, with nine of their 11 studio albums represented in a setlist that would make any Dinosaur Jr. fan drool.

At least ten amplifiers were stacked behind the three-piece band, the wall of Marshalls substituting any sort of backdrop.

As one would expect, the show was pure rock ‘n roll. To put it frankly, it was loud as shit.

The band appropriately opened with “Bulbs Of Passion,” a song from their 1985 debut, Dinosaur. Guitarist J. Mascis stopped shortly after beginning to fix the sound, but quickly resumed.

One could immediately comprehend the sound that gained the band such a diehard following, the abrupt leap from Mascis’s soft vocals and clean guitar to a distorted, sludgy riff earning the band massive applause.

“The Lung” followed, a classic from the band’s seminal sophomore release and breakthrough You’re Living All Over Me, the band seeming to give a chronological tour of their early discography.

The song felt like a quick blast of rock, its energetic, punk chord-progression giving way to a classic guitar solo as bassist Lou Barlow’s constantly moving bass lines matched his on stage demeanor, his long hair covering his face as he danced and jumped about the stage, his amplifiers towering high over head.

“Alright, thanks for coming,” Mascis said humbly. “We’re going to play a few new ones now.”

“Goin’ Down,” the first track from the band’s excellent new record, Give A Glimpse Of What Yer Not, featured a chugging riff and catchy chorus, offering a short release from the intensity of the opening tracks.

The new songs featured the same crunchy riffs and classically influenced guitar solos as any of their older material, yet had a melodic sense that surely comes with maturity and age. “I Told Everyone” gave the drummer an opportunity to solo at its finish, a nod to the rock tradition as a whole.

After three new songs, the band performed “The Wagon.” Despite being from 1991, its alternative vibes fit perfectly with the newer material.

The band’s ability to maintain such a high level of energy is practically unrivaled, the artists never offering a break or release, simply barraging the crowd’s eardrums with one noisy rocker after another, pulling from the most vigorous influences of punk and alternative throughout.

Mascis’s combination of feedback, heavy riffs and face-melting solos offered a perfect amount of variety, keeping each song fresh and exciting while somehow constantly building momentum. Barlow’s bass playing was simply mesmerizing, using the full neck of the instrument to create counter-melodies that often rivaled the guitar. Murph’s drumming sat on the borderline of clean and sloppy, providing a necessary edge while keeping each song together.

Few trios have boasted such talent in the history of modern music.

“Watch The Corners” began as deafening feedback noise, the band slowly joining in and working toward the song’s massive climax. “Pieces” was almost over-stimulating, its rampant energy sounding like a combination of Jimmy Page and Pearl Jam.

“Knocked Around” felt spacious, soft and slow compared to the rest of the set, the track’s delicate beginning a short break for the band and audience alike until its eventual build.

The strategically designed setlist ended with a run of primarily older songs, including Bug’s “Budge” and “Freak Scene,” Where You Been’s “Start Choppin” and, perhaps most notably, Dinosaur’s “Gargoyle.”

The latter closed the set, bookending the show with songs from the band’s first album, the group transforming the track into an insane classic-rock rager. The song, originally recorded in 1985, seemed to encapsulate all of the adrenaline from the 90s, building endlessly throughout a climactic five-minute jam.

Sixteen songs into the set, the band was still on fire, refusing to slow down even slightly.

The band returned for an encore, easing in with “Get Me,” the song’s highly electric solo its main highlight.

“Mountain Man,” again from the band’s debut record, closed the set by perfectly encapsulating the band’s sound. Barlow’s vocals fell atop a metal-like riff, the bassist’s face buried in the microphone. Another action-packed guitar solo led to the outro, a full-band classic-rock freakout stressing their ability to feed off one another’s energy and their collective refusal to slow down.

In both new and old material, Dinosaur Jr. remained amongst the most impressive alternative bands in the current scene and of all time, their influence obvious and legacy justified.

Read the setlist and watch videos from the show below. 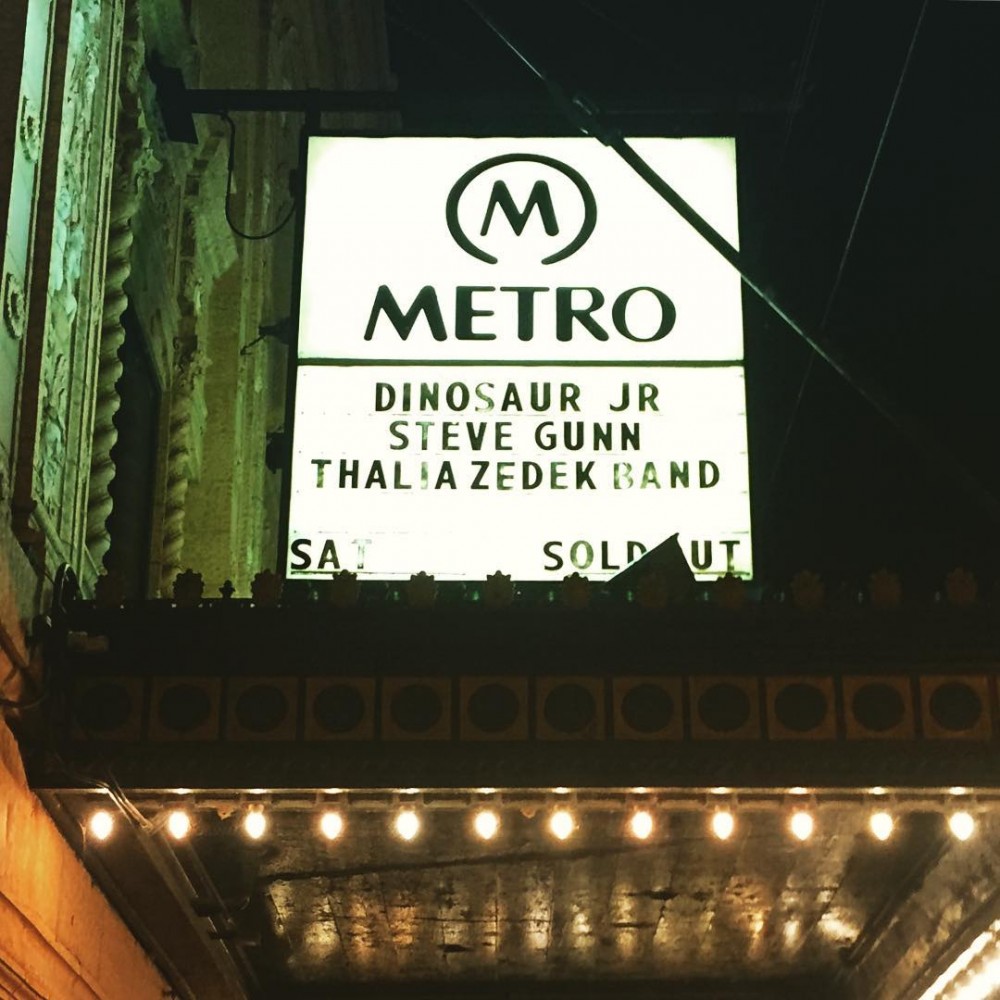