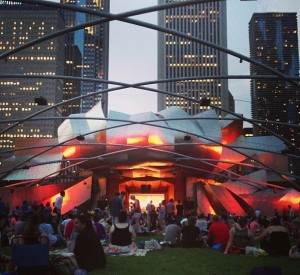 Few things are able to crystallize the present moment like music.  The music of Dawes is certainly no exception, but during their concert at Millenium Park's Pritzker Pavilion, as they willed away the rain, I was just as likely to be thinking about the past and the future, particularly the fate of this extremely young and talented band.

In the here and now, the band satisfies our need to connect -- despite the compact nature of their songs, most are blessed with a oddly expansive narrative element.  The opening tune "From A Window Seat" was delivered complete with characters, plot, and resolution that accompanied its buoyant, yet economical arrangement.  As the sound washed over the audience, it was hard not to be transported -- not only to the world of Taylor Goldsmith's songwriting, but also to a time 40 years earlier, when this sunny and engaging straight ahead California rock would have topped the charts alongside with tunes from oft-compared artists like Jackson Browne and Crosby, Stills, Nash & Young.

Which also got me thinking about the future.  What's stopping a band like Dawes from mining that type of gold in the 21st century?   Certainly not the command and charisma of Taylor Goldsmith, whose earnest, expressive singing and guitar playing added a few layers of complexity to the straightforward "Most People".

If acts like Mumford & Sons and Lumineers can break through, perhaps it's only a matter of time before Dawes is right there, too.  There are probably only two items on the recipe card for similar success. 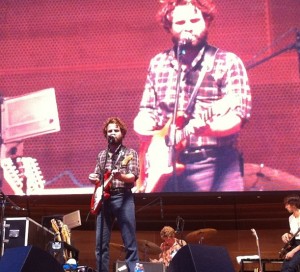 The first is exposure, and Dawes is playing the game masterfully, at least in the Chicago market.  Building buzz through festival appearances, some intimate club dates at the cities best venues for emerging talent (Lincoln Hall, Metro), a first come/first served afternoon radio promo show in April, and now a free show in one of the most picturesque and best sounding venues in the city.

Goldsmith remarked to the crowd how this was easily the biggest crowd they've ever played to in the city, including their Lollapalooza appearance -- indeed, bodies covered the expanse of the Great Lawn, probably 3000 or more of them.  He knew that this would be the first time experiencing the band for many of them ("maybe even the first time you've heard of us"), but throughout the set, they made every effort to make sure it wasn't their last, alternating songs between subtle/emotive and rollicking/infectious.  Big, friendly hooks in songs like "Fire Away" and "If I Wanted Someone" were able to deliver a hint of recognition even for the uninitiated.  A wise move by Dawes' handlers -- the first taste is free, but they are a band that you feel at home with instantly, and draw deeper connections with more more plays, you can sense them building the audience with every note that the collective produces.

The second thing they need, like those other bands who our now headlining mega-festivals, is a breakthrough song.  "When My Time Comes" seemed to garner the best response from the crowd, who enthusiastically erupted at the first strums.  Goldsmith, pausing dramatically to get the audience to sing along with the song's anthemic chorus, reveled in the moment.  And at the clip he reels of gems like the newer tunes from Stories Don't End, "Something In Common" and "From The Right Angle" certainly fit the bill last night, it should only be a matter of time before one finds itself in the right place at the right time. 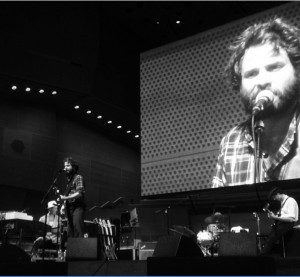 When they do break through, audiences will find themselves with something amazing: an impeccable studio band that can back up the goods live.  Even this show clocked in at about 80 minutes while only scratching the surface of their fine three album catalog. Where the gig I caught in April felt more like a showcase of the new album, this one represented a full flowering of a band with a lot to say.  With legs under them from a full slate of touring, another LP full of great songs, and a couple of covers, we may be on the verge of some truly epic concerts from a band with staying power.

The set closing "Little Bit Of Everything" summed up that notion quite nicely -- starting tender and boiling over into a collective release before we were sent home.  Like the song's characters, it left me hoping for a bright future, especially for Dawes.

Setlist (from memory... may have missed a couple)

From A Window Seat, If I Wanted Someone, Most People, Time Spent In Los Angeles, Fire Away, When My Time Comes, Something In Common, My Way Back Home, From The Right Angle, A Little Bit Of Everything