Crafting a true "destination" event can be as risky for a promoter as the improvisational turns that performers take on stage.  Stakes are higher when the music is delivered by a one time configuration, then ratcheted up another notch when the supergroup draws from a pool best known for both Grateful Dead related projects and jamtronica, which don't necessarily afford a natural fit.  With a fairly steep ticket price for Otter Presents' Top Of The Tower Jam on Friday night, there were plenty of chips on the table. 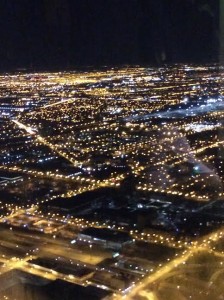 The first spin of the wheel paid off handsomely, as it became clear that the weather Friday night was clear and the view would be spectacular -- the entire area was visible from the multitude of windows lining the 99th Floor Sears Tower Skydeck. Chicago jamband veteran John Kadlecik fronted the makeshift outfit, while bandmates Scott Metzger, Steve Molitz, Allen Aucoin, and Clay Parnell brought a diverse musical background to the mix.

While the pricey ducats undoubtedly deterred some from the event, this event was offered as more of a package and broken down piece by piece provided a sort of unique value.  While the SkyDeck is a huge tourist draw, it's not something that Chicagoans frequent, and may have never been there at all.  This was a pretty good opportunity to go up there for a reason.  And considering a normal ride up the elevator will set you back $18 ($40 if you want to bypass the massive queue on a typical day), you can already see how itemizing can help justify the experience.

And unlike your typical concert, the package also included food and beverage.  Upon arriving, finger sandwiches, grilled veggies, and brownies were provided for all attendees -- with a little effort, you could reasonably call this a meal.  There was a also a pretty well stocked open bar serving a decent selection of beer, wine and liquor. Although there was some confusion about an open bar or five drink limit in early announcements for this show, once the event started it was clear that the only limits on this night were how booze much one could handle.

The 99th floor itself doesn't exactly scream classic rock room, with low ceilings and the makeshift "stage" tucked away into a corner with cables and running roughshod along the floor.  The unlikely music room was probably more used to hosting corporate get-togethers or other banquet style events and kind of gave off an upscale wedding vibe.  But the crowd came ready to embrace it, many donning formal attire (with or without flatbrim cap) to acknowledge the environs.  Further adding to the atmosphere, vendors hawking caps, glass, crystals, and artwork were lining the hallways.

But the main event was the music, and after a DJ set and opening act by Dr. Diesel, the Skydeck Allstars wasted no time in hitting their Grateful Dead notes, coming out of the gates with a scorching rendition of "Shakedown Street".  Kadlecik and Metzger traded solos while Parnell, Aucoin, and Molitz held down a very danceable groove. After slowing down a bit with The Band favorite, "Ophelia", the other side of this band's musical influence was indulged as they busted out the Kraftwerk classic "The Model".  This tune was jammed out before landing beautifully into the Police’s "Walking in Your Footsteps". An unexpected delight, this song was a clear highlight of the evening as the band tore through this song while lending it the full a reggae dance hall jam hinted at in the original. The untz continued with the extended, Molitz-led "Lunar Pursuit" which segued into an intense "Fire on the Mountain" to close the set.

After a short setbreak, the band returned to the stage with a welcome ode to Chicago, Aliotta Haynes Jeremiah’s "Lake Shore Drive".  As in the first set, from here the band alternated between electronic sounding jams and Grateful Dead classics.  The meat of the second set was "Other One" > "Ripple" > "Other One", while the Particle gem "Launchpad "closed out the evening and sent the crowd back down to earth, literally and figuratively.

If you like everything on your Thanksgiving plate mashed up -- you hit the jackpot on this night.  Otter Presents is known for "going big" and this was no exception.  From music sourced across the jamband spectrum to crafting a rock venue out of (and in) thin air, there are bound to be a few flavors that don't sit right, but that's also where the magic is made.  I'd love to see where they go next. 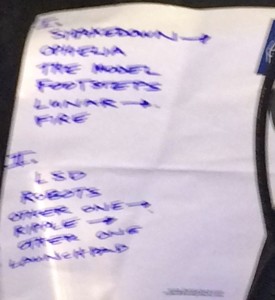 Set One:
Shakedown Street
Ophelia (The Band)
The Model (Kraftwerk)>
Walking in Your Footsteps (The Police)
Lunar Pursuit ->
Fire on the Mountain

Set Two:
Lake Shore Drive (Aliotta Haynes Jeremiah)
Robots(?)
The Other One->
Ripple->
The Other One
Launchpad (Particle)