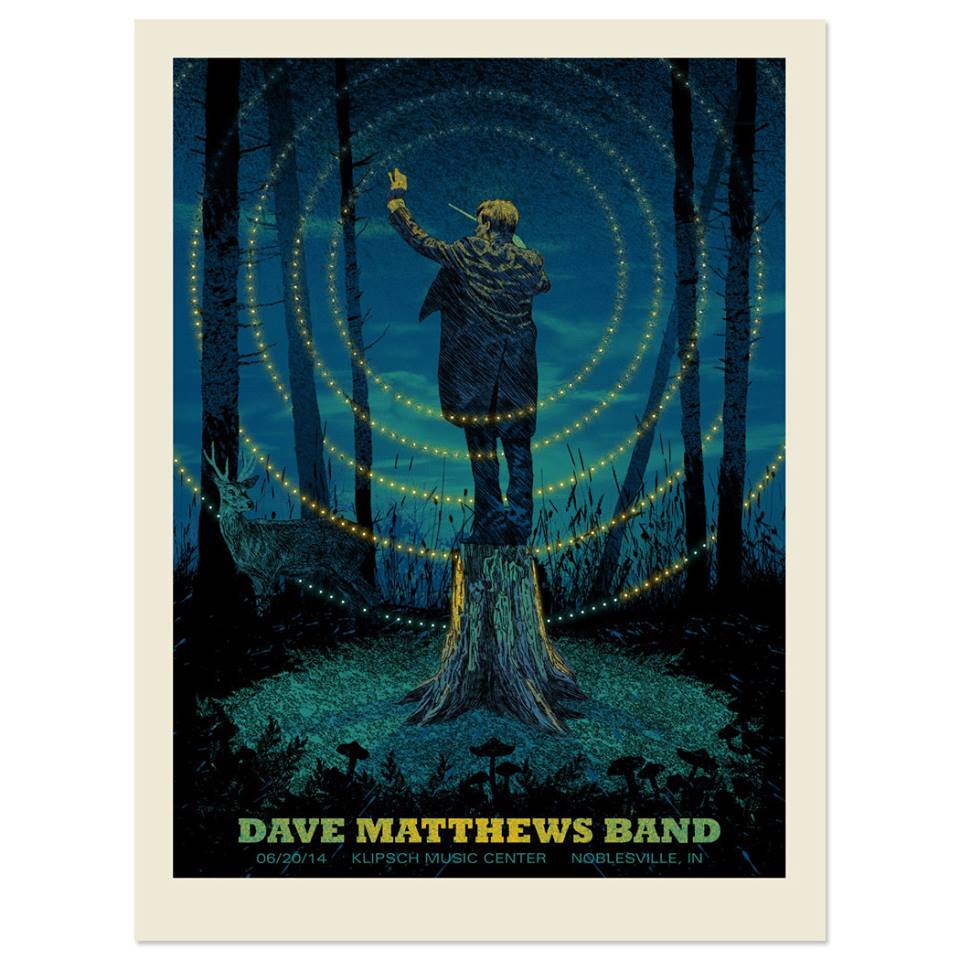 Regardless of your opinion of Dave Matthews Band, their massive Summer 2014 tour is worthy of note,  and the band set out to prove it during their first night in Noblesville.

Offering a show divided into two sets for the first time since 1996, the tour allows for a lot surprises and unique performances, something that many accuse, wrongfully, that the band’s live show lacks.

The first set is a stellar idea, and was perfect in its execution. Dave Matthews Band replaces the usual opening band with an acoustic set, utilizing different combinations of members each night, a move that guarantees unique, noteworthy, one-night-only performances, firing the crowd up for a bigger electric set to follow.

But first, the acoustic set.

Matthews wandered on stage alone, opening with “Beach Ball,” a tour debut. When guitarist Tim Reynolds walked on stage after, the applause was actually larger than it had been for Dave.

The drama of this purposefully slow addition of band members served to excite the crowd.

The audience was treated to an especially inspired “Bartender,” a treat for anyone who hasn’t seen the fairly rare Dave & Tim shows in the past.

Drummer Carter Beauford, trumpeter Rashawn Ross and bassist Stefan Lessard joined for a cover of Paul Simon’s “Slip Slidin’ Away,” all standing in a line toward the front of the stage, Carter on a small set and Stefan on an upright bass.

The cover felt like a party, a vibe I argue existed throughout the night, the crowd singing, dancing and cheering with an especially large enthusiasm.

A funky but light improvised jam followed, extending this vibe into a perfectly placed “Two Step,” only upping the energy while adding violinist Boyd Tinsley and saxophonist Jeff Coffin into the mix.

The performance of “Tripping Billies” two songs later kept momentum high, though “I’ll Back You Up” may have been the set’s real treat. Among the band’s earliest songs, it provided a break in the fast-paced set, its delicate, emotional nature holding all the intensity of bigger songs.

“What Would You Say” closed the set, again channeling that party vibe and keeping the crowd dancing during a disgusting flute solo from Coffin.

With so many heavyweights played early on, fans were rightfully left with high expectations at the end of the set, and I venture to guess that nobody left disappointed.

“Save Me,” a track from Dave Matthews’ Some Devil, opened the second set, its massive, crunchy riff driving forward and allowing Reynolds space to experiment on guitar over blasting horn lines. By the end of the song, the band’s sound was massive, thanks mostly to Matthews’ ceaseless vocals and the powerful horn section.

Energy remained high for the funky “Seven” before “Crush” stepped things up a notch. Stefan’s opening bass line sends the crowd salivating like Pavlov's dogs, the fans well aware of the hefty jam to follow.

With the sun setting behind the amphitheater, the band spent a solid ten minutes trading solos following the sing-along verses, Tinsley’s violin giving way to an especially inventive guitar solo from Reynolds, the horns sneaking into the background as the solo grows faster and faster.

Soon, the whole band is tearing up the riff that used to be restricted to the background, Beauford drumming with absurd intensity beneath.

“Belly Belly Nice” kept the funky, high-energy vibe intact, a song undoubtedly made for dancing, and another to classify under the aforementioned “party vibe.” 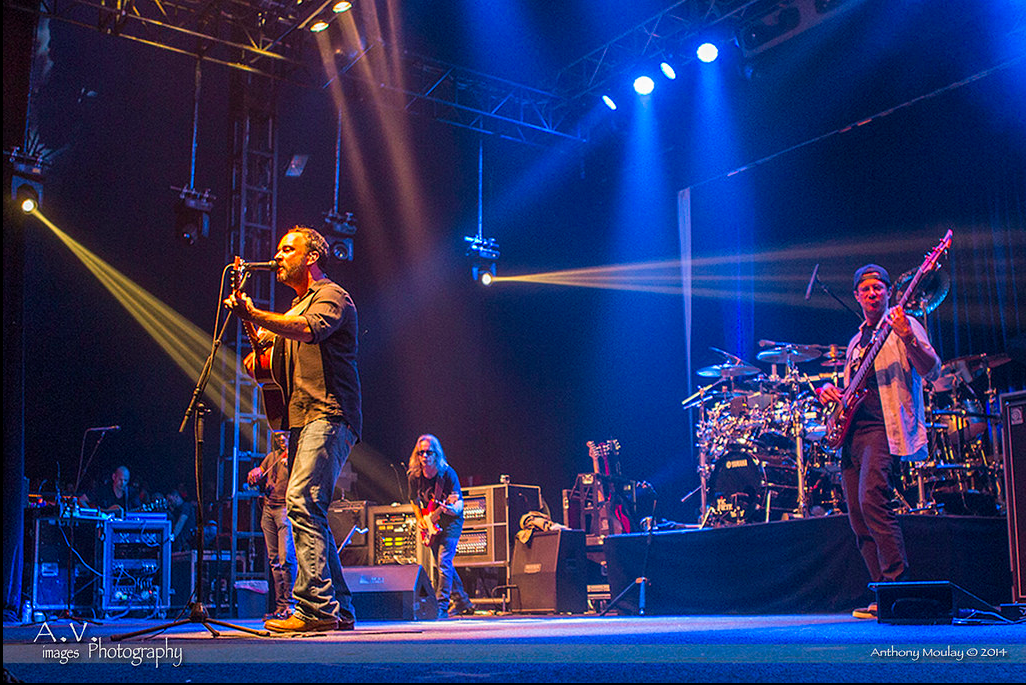 The set’s low-point followed, with “Proudest Monkey” and “Satellite,” the former allowing for a spacious, jazz-focused trumpet solo paired with Reynolds’ usual role in wrapping the track up with guitar.

The band, however, would more than make up for this with what has to be one of the most well-constructed run of songs to close out a DMB set in recent history.

Using “The Song That Jane Likes” as a transition, the band worked its way into an unexpected “So Right,” a song from Everyday that matched the funky, party vibe of newer tracks like “Belly Belly Nice” or “Seven.”

“Dancing Nancies” opened with ominous guitar noise from Reynolds before turning into its typical breezy, cheerful jam, with a long, simplistic violin solo from Tinsley, the real highlight coming in the song’s quick transition to “Warehouse.”

Like the flip of a light switch, the violin solo becomes the acoustic intro to “Warehouse,” one classic into another. A tense intro gives way to a gigantic sound at the verses, the song constantly shifting its feel and the lighting matching perfectly.

“Warehouse” takes the breezy feel of “Nancies” by its mid-section, followed by another blistering solo from Reynolds. The song keeps building momentum as trumpet takes over, only to become an interpolation of “Louie Louie.”

If ever the show demonstrates feeling like a party, this is it. The audience cheers and sways, singing along with Matthews for the garage-rock classic.

A long pause was followed by “Water Into Wine,” another rarity pulled from the band’s early days, before becoming a “Pantala Naga Pampa” into “Rapunzel.”

The set closed with “Rapunzel,” the song a perfect blend of Dave Matthews Band’s style, funky guitar and vocals meeting complex rhythms and drumming. The party continued, the audience screaming the vocal hook as the band performed a loose but precise rendition, still packed with energy that mirrored the crowd’s enthusiasm.

The second set had been a festivity of sorts, balancing upbeat funky songs with the old and rare, never losing its intensity and certainly never losing the audience.

The encore matched this feel, as though a confirmation of the festive atmosphere of the evening.

“Good Good Time” followed, the song only seeing occasional performances since its 2004 debut. The song fits its title perfectly, a feel-good sing-along that sounds relaxed compared to what preceded it.

“Let’s have a good, good time tonight
Listen to what he said
It’s a good thing to have good friends
We’re alone in the end”

By the end, the audience was clapping in unison, only guitar and vocals carrying the song to its finish.

“Shake Me Like A Monkey” closed the show as a funky, electric finale to a night filled with exactly that, blending a dirty guitar riff with punchy horns, crisp, powerful drumming and Matthews’ flowing vocal lines.

The party was over, the stage was dark and the audience left in joyful amazement. 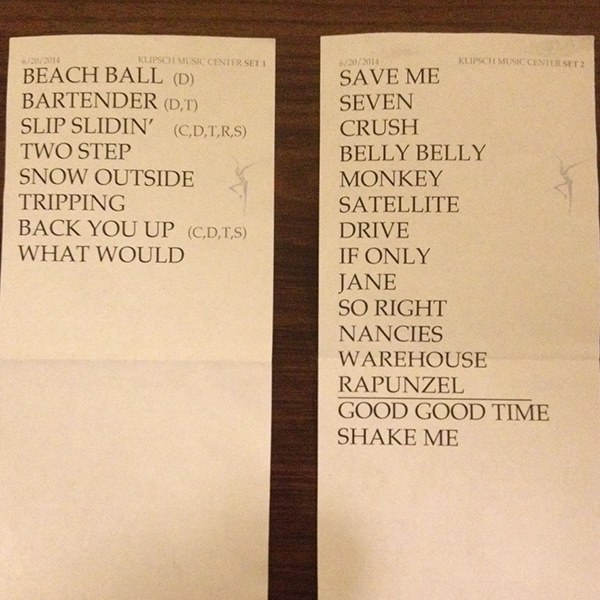