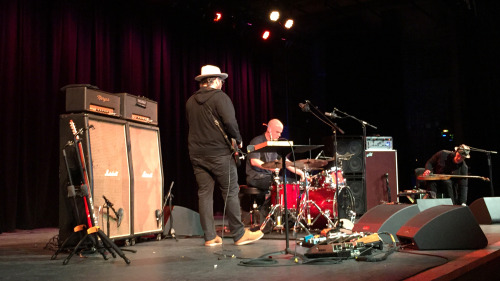 Jeff Tweedy contains multitudes.  Even within a single Wilco show, he can jump between art-rock provocatuer, emotional songwriter, and stand-up comedian.  But untether him completely from the band, or his side projects, or his solo gigs, and even more is revealed.

At March's Big Ears Festival in Knoxville, TN, Joel Berk (@pfcidb) was on hand to catch his set with the duo Chikamorachi, and let the the tape roll.

As he shares on his sweetblahg.

Beginning with a simple/unmic’d “hello”, Jeff Tweedy and Chris Corsano on drums  / Darin Gray on bass (together, Chikamorachi) spent the next ~50 unplanned minutes of fury assaulting the (surprisingly small) audience with rolling waves of sonic blasts cut with sparse, brooding interludes that would detonate just as soon as you started to feel comfortable.

From minute one,  it was clear that probable alien, Corsano (seriously…how else do you explain that shit?) was in the driver’s seat with Gray providing colossal rumble and Tweedy’s feedback-laden squalls dancing atop all of that thunder. The Loose Fur guitarist seemed to revel in not having to play frontman for once, leaning into every pick/pull/bend/whammy like a dad possessed.

I can’t think of a better place for the first (/hopefully not last) ‘Tweedy Meets Chikamorachi’ show than the Big Ears Festival, and having an esteemed songsmith improvise a noise set is just about as Big Ears as it gets.

This one is a ripper and should be played at maximum volume for maximum effect.

Download the entire set at sweetblahg or stream it here:

Some additional Big Ears videos featuring Wilco and it's members via seijinlee.

From Wilco's set at Tennessee Theatre: "Radio Cure" & "If I Ever Was A Child"