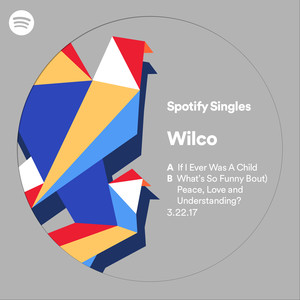 Members of Wilco have been staying busy recently, which is great news for fans of the band.

The band recently recorded two tracks for a Spotify Singles series, including a cover of Nick Lowe’s “(What’s So Funny Bout) Peace, Love And Understanding?” (The song was later made famous by Elvis Costello.)

The cover seems to fit with the simplified, clean sound that Wilco perfected on Schmilco, with a romping piano and drum part keeping a pounding beat beneath Tweedy’s vocals and Cline’s skuzzy electric guitar.

The single also includes a recording of “If I Ever Was A Child” which captures the song’s delicate nature balanced with a nice amount of twang.

While you’re at it, give “Laminated Cat” another spin, the first song released from Tweedy’s upcoming solo album, Together At Last.

The song has frequently found its way into Wilco sets over the past few years, though it originated on the debut album from Loose Fur, Tweedy’s collaboration with producer Jim O’Rourke.

The stripped-down version offers a take different from both live performances and the original studio track.