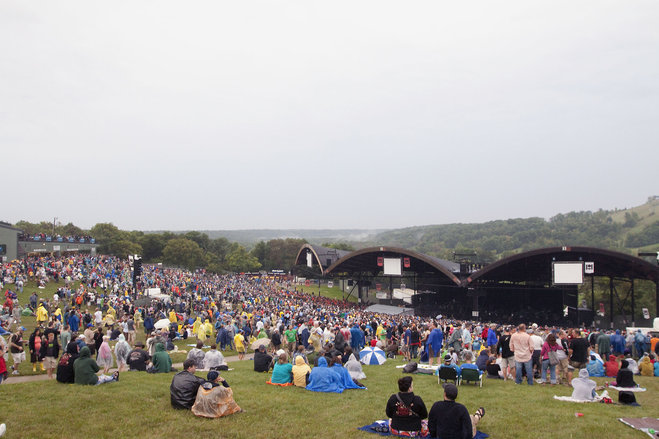 Update 3/17/17 - Yesterday, MyWalworthCounty.com reported that Alpine Valley will not host concerts during the 2017 season.  Jon Reens, Live Nation VP of marketing in the Midwest was quoted several times in the article:

"It’s an unusual year in that a lot of artists we’ve traditionally hosted are playing in other buildings or not playing at all this season....  Either they’re not coming through Wisconsin [sic] or are playing at places like Wrigley Field instead of Alpine Valley... Whether it was touring schedules, or production design where they can’t fit on our stage, or other things, they were not able to confirm for 2017."

But he also left the door open for a return to hosting shows next summer. "We have absolutely zero intention of abandoning the facility.  We are refocusing on 2018 to build a more robust schedule. We had to make a difficult decision to not open for this year, but we’re focusing on 2018.”

The news reminded us a lot of the essay we published before last summer's Dead & Company shows at the venue, which in some ways predicted this.  Read it below.

While Alpine Valley Music Theater has been hosting concerts since 1977, both the venue and its operations, are completely different today than in years past.

For the first itme since the 1980s, the venue has allowed camping on-site for a pair of shows this season.  The promoters have even explained the change as a response to the declining popularity and attendance at the venerable shed.

The site itself was chosen to draw from several population centers across Southern Wisconsin and Northern Illinois: Chicago, Milwaukee, Rockford & Madison, within a reasonable drive of each of these towns.  And in the venue's early years, the strategy paid off.

A veritable rite of passage for youth in the eighties and nineties, promoters used the venue as a summer homebase for all of these markets.  Bolstered by radio's, and subsequently MTV's, ability to break artists huge.  Bands of these eras toured behind albums, not singles, most offering up a full repertoire of music that fans could get excited for.

It was a time when rock still had some cache and Alpine Valley -- it's vast, pastoral parking lot, general admission lawn seating and classic wooden roof -- had a true rock-and-roll feel.

And ticket prices were geared towards youth -- they were generally affordable -- and it was an era before reselling became a huge cottage industry of its own.

But something happened as the industry began to shift in the nineties and certainly into the 21st century.

Trends started by MTV soon swung to a place where rock got the squeeze.  Singles dominated and LPs swooned.  Radio became far less influential in breaking artists, while roll-your-own methods of music discovery like files, streaming and YouTube proliferated.  Live acts now tend to prefer the wide open space of arenas and stadiums for their massive multi-sensory productions that put equal emphasis on visuals than on music, than the confines of the ampitheater.

Festivals popped up to offer an alternative to seeing huge acts play single shows.  While the number of acts that could draw thousands to a shed like Alpine plummeted, multi-act destination events put a handful of headliners on the topline and filled out rosters with dozens of more niche acts.  These were offered in big cities where people lived and could take public transportation or in vast fields with, yep, camping.

It became much more lucrative, and much less risky, for acts to perform at these festivals than to mount their own tours.  As more alternatives popped up in places that never hosted shows before, venues like Alpine, designed for accessibility, now seemed to be situated in the middle of nowhere.

All the while, ticket prices for individual shows soared, making these festivals that much more of a bang-for-buck value.  Their brands became as much of a draw as the invidual bands who were previously booked in ampitheaters like Alpine.

The popularity of the Grateful Dead at Alpine and the tolerance of camping at their stops made it one of the most beloved venues for Deadheads.  But ultimately, it became their undoing.  As larger and larger, hard to manage crowds descended upon the venue by the late 80s, when they were ultimately banned from performing there.

Seven years later, it was Phish's turn to take the jamband torch at Alpine Valley.  And while their annual 90s/early 00s shows quickly became the stuff of legend, and drew very well at the venue, they have been less successful in recent years.  The band / promoter's response?  To book Phish's summer gigs in Chicago, where the people are, where its easier to find a place to stay, grab a bite to eat, or find a place to hang after the show.

A few summers ago, the venue was put on the market for sale.  Apparently, there were no takers.

Meanwhile promoters, including LiveNation who books the venue, seem be moving in the direction of VIP experiences, where Alpine is an uneasy fit.  The venue has expanded to acommodate these types of perks: selling off the old beer decks to high bidders, reserving the pit for high rollers, cashing in on close-to-entry parking, and investing in VIP areas in the old exposition hall at the top of the hill.  Still, there is little at the quaint venue that screams luxe.

Aside from perennial acts like Jimmy Buffet and Dave Matthews Band, booking the venue appears to be too much of a gamble.

Now camping is back.  The Dead is back, in the form of Dead & Company.  But can these things save Alpine Valley?

It seems like most acts that perform there have an element of nostalgia, marketed to folks who spent their glory years at Alpine, and not the youth at the cutting edge of music culture, who attend multiple shows per year.  But even the veterans with fond memories of the old days may find the steep lawn, and long drive home (or alternatively, the inflated cost of Lake Geneva lodging) a bit too oppressive to make it worthwhile.

You never know.  A great resurgence in interest may be around the corner.  Perhaps camping can open the door for the type of festival experience that might open up a new chapter in the venue's story.  Maybe it will become the venue of choice for the next generation of fans, egged on by the bouyant ghosts of legendary shows past.

But some of that may be dependent on where the industry goes next.  We'll see.