Based on activity in the jamband blogosphere, I'm guessing we may have crossed threshold of peak jam bracketology.  In 2013, bloggers (and official band sites) flooded the Internets with their own fields of 64 to prove what the best show, song, jam or run from the band of their choice would be, but this year things seem much much quieter.

Still, there is some 2014 action, which I'll spotlight, along with some of the results of last year's tournaments, which I didn't get to publish in last year's post.

1. New on the scene this year is a new bracket from dead.net.  They've run The Dead Covers project for a couple of years now, but this is the first time I've seen them but the participants into such a good looking and fun interactive bracket. 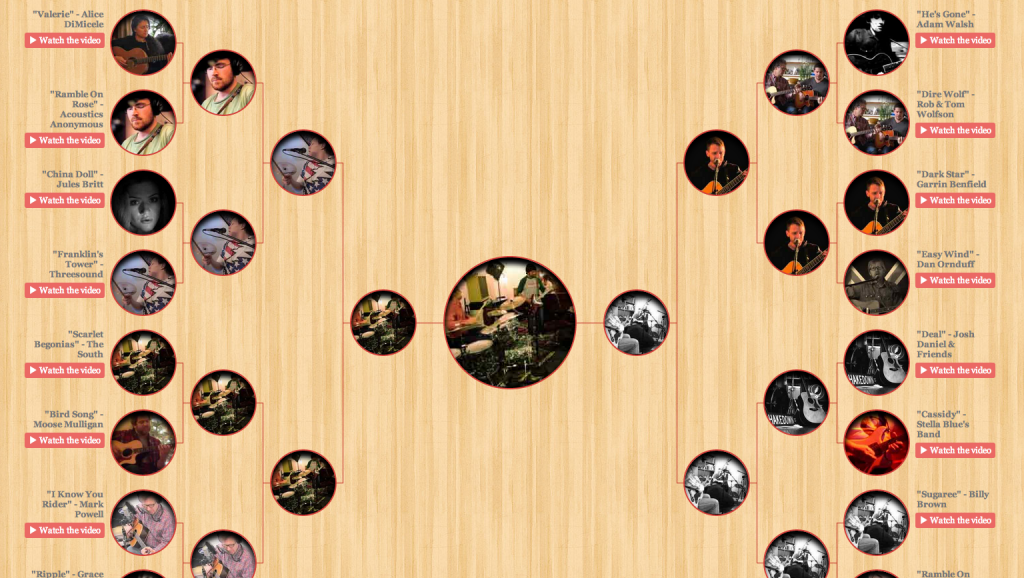 It's not exactly clear how the voting works, but graphics and usability is top notch!

2. On the Phish front… ambition was the word for what a few bloggers accomplished.

The TypeIICast spend a lot of time chatting about Phish and they can get DEEP.  Their 2013 bracket was labeled the Phish Nerdgasm and pitted best jams against each other within the confines of a few ground rules.  Here's how the bracket broke down... 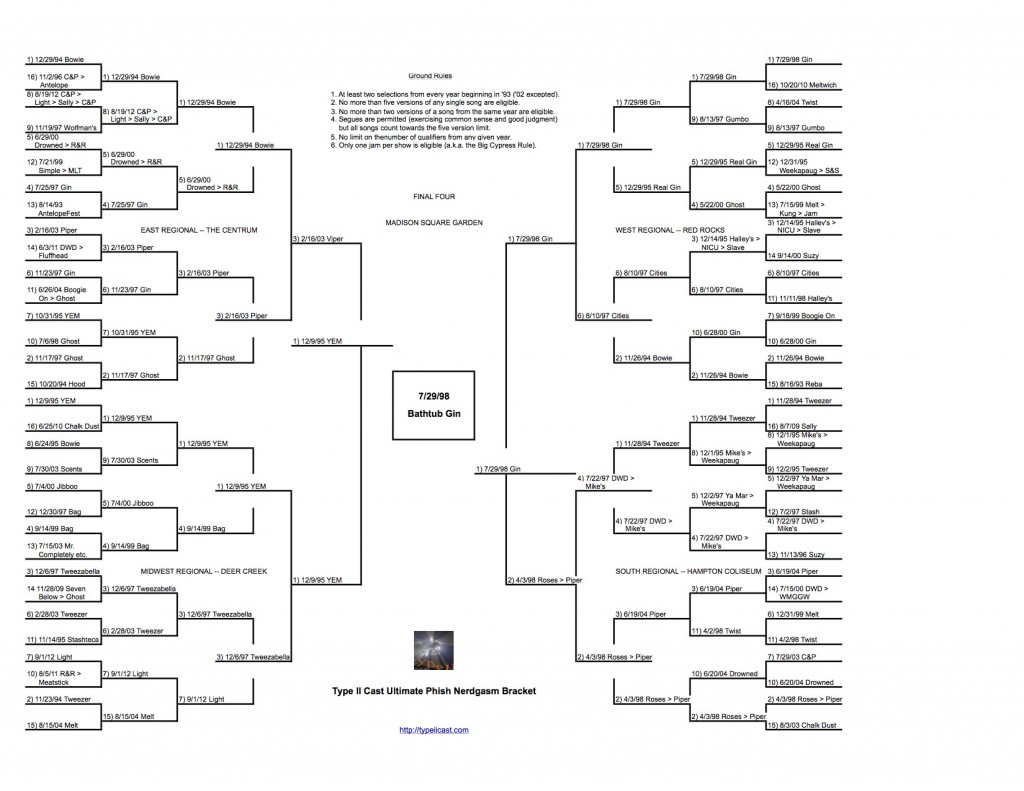 The Online Phish Tour "jampionship" focussed only on the 3.0 years and let their readers vote.  Cleverly, each bracket was one of the four years in 3.0 era up until that point (I suspect a new winner may have come from 2013 had they had the benefit of those performances last March).  Here's the bracket: 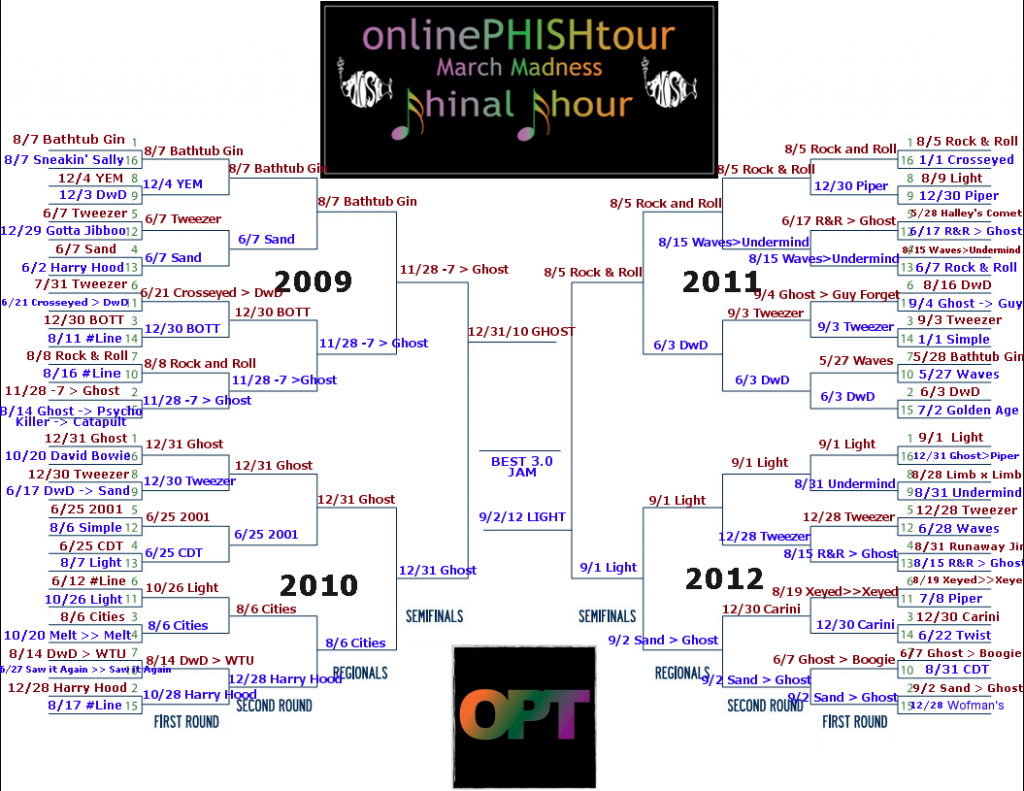 3. Finally, Panic Stream hosted another song tournament.  Where the previous years focussed on songs ("Diner" took the top spot), the 2013 edition was about the performances.  Not surprisingly, the final came down to a '95 "Chilly Water" and '96 version of "Arleen".  Here's how the brackets shaped up, which featured 64 jams, all from the Mikey era. 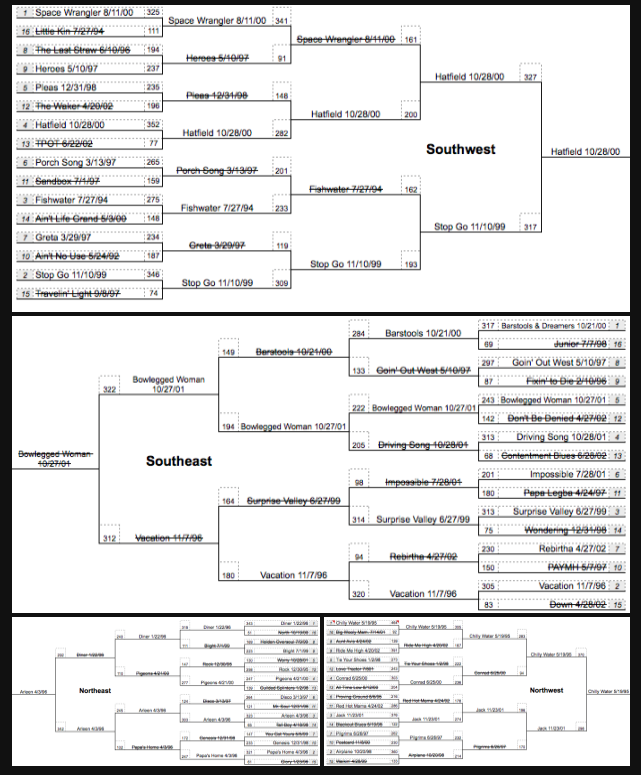 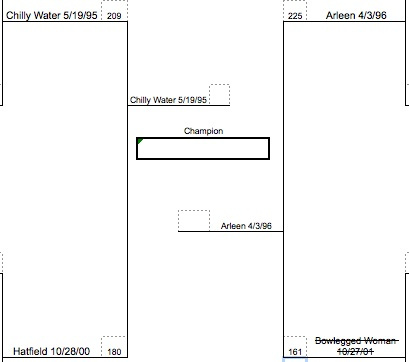 And "Arleen" took the prize.  The 14 minute version was performed in Huntsville Alabama, sandwiched between "Tie Your Shoes" and "Vacation".  Makes sense to me.  Have a listen via PanicStream...