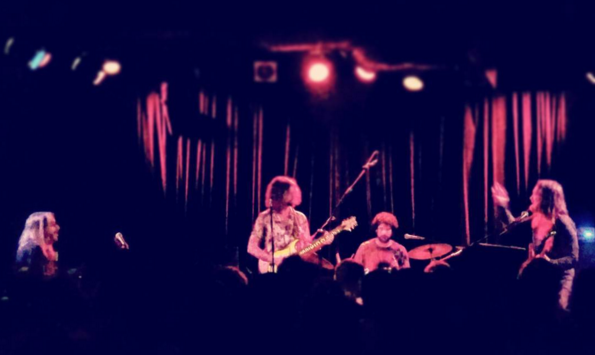 By the way I count, the last time Jeff Chimenti performed in Chicago, he was standing in front of 70,000 strong at Soldier Field during the final Fare Thee Well on July 6, 2015.

So the cozy confines of Martyrs' probably had a bit of different feel for him.

Maybe not so much for Golden Gate Wingmen bandmate John Kadelick, who although has played plenty with Weir and Lesh in Furthur, cut his teeth on the Martyrs' stage weekly for many years with Dark Star Orchestra in their earliest years.

Together with Reed Mathis (Billy & The Kids, Tea Leaf Green) and Jay Lane (Ratdog, Primus) they formed a four piece that have logged many miles with the music (and members) of the Grateful Dead.  It's no wonder that GGW was an advance sellout on a Friday night in the big city.

GD songs both classic (Help On The Way > Slipknot, Terrapin Station, Not Fade Away) and relatively obscure (Lazy River Road) found their way into the set.  But the classic rock of Bob Dylan, Zeppelin, The Who and John Lennon also peppered the setlist, as well as a twelve minute, second set opening workout on the King Floyd (by way of Legion Of Mary) deep track "I Feel Like Dynamite".

For those who didn't make it, some great media is available to document what went down.  Here's Jeff Frank's soundboard recording.

YouTuber mmmphish1 was also on hand to capture a few of these tunes with his camera.

Help on the Way > Slipknot! >Nobody Told Me, To Romona, What's Become of Mary, The Rain Song, Join Together

I Feel Like Dynamite, Seen Love, Hearts and Bones, Lazy River Road, The Ladder, Walking In Your Footsteps, Terrapin Station, Throwin' Stones, Not Fade Away