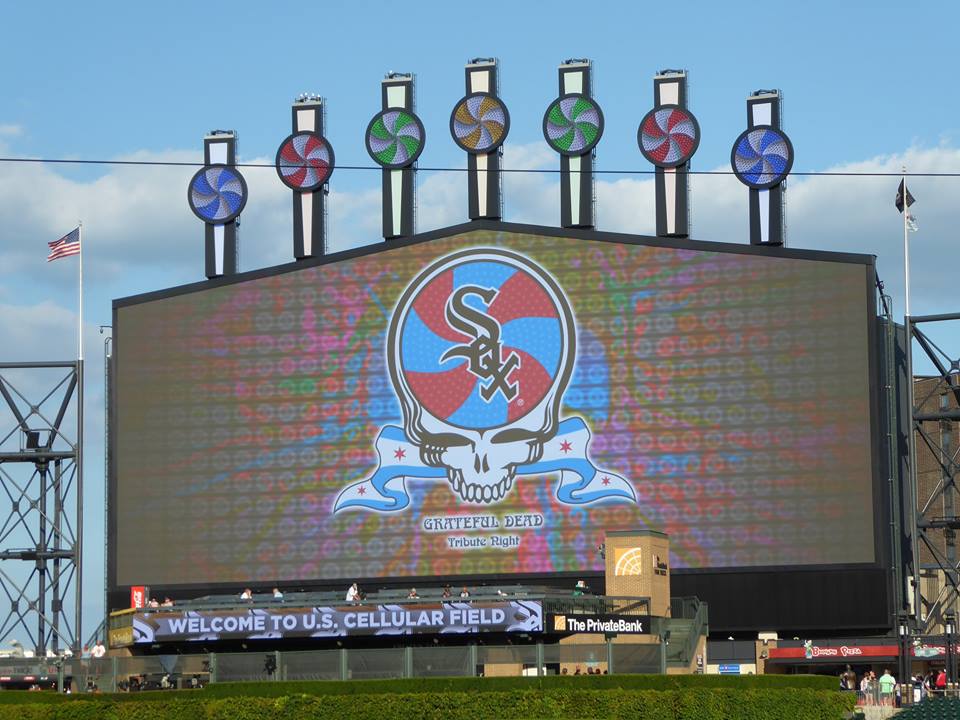 The White Sox hosted the infamous Disco Demolition night back in the 70s and in more recent years welcomed Elvis and Country Music fans to the ballpark.  One year after Fare Thee Well graced another of the city's sports stadiums, the team welcomed Deadheads to the park for the first ever Grateful Dead Night at U.S. Cellular Field.

There was certainly plenty to see and do, with some excellent choices and some questionable calls.  Here are ten highs and lows of of the White Sox Dead Night.

1. Appearances by Chicago's own Terrapin Flyer featuring Tom Constanten definitely top the list of "highs".  The band performed a set at a small stage outside the stadium before the game and was set up to play some between inning tunes in the Kids' FUNdamentals Areas in Left Field.

It was nice to hear their "Shakedown Street" blasting over the ballpark's PA system while entering the ballpark and the occasional cutaways to the band's live performance on the Jumbotron was pretty cool for this hometown act.

Between inning songs included "Eyes Of The World", "Dark Star", "Mountains Of The Moon", and "Sunshine Daydream".

2. TC's first pitch.  Technically second pitch, since USMNT goalkeeper Brad Guzan got a chance before him.  Also, it wasn't exactly a strike. That pesky sun prevents you from clear seeing it in the video below, but you can hear the strains of Aoxomoxoa's "China Cat Sunflower" greet him as he steps off the mound.

3. It wasn't TC, but the White Sox organist did manage to sneak in some Dead tunes during the warmup and the occasional game downtime.  "Friend Of The Devil" and "Truckin'" both made appearances.

4. Food service got in on the GD action, offering a Shroom Burger (Portabella, of course) as a special item for Tuesday's game.

5. Facepalm department.  There was a table set up on the lower concourse offering "Flower Power" shades and plastic "hippie" beads.  I thought the kitschy, Made-In-China junk was promotional giveaway.  Nope. $5 for the glasses and $2 for the beads.

6. Many fans sprung for a presale package that included a limited edition GD/WS T-shirts.  Lines were long for the pickup, but many fans were sporting them that night.  There was also a great mix of Steal Your Face Bears, Hawks and, yes, Cubs gear worn for the occasion with plenty of year-old GD50 merchandise and tie-dye also part of the fashion on hand.

7. Even though it was Grateful Dead night, they didn't exactly go "all in".  There was plenty of other music that was being piped in, and much of it was a jarring contrast to the Dead tunes.  I didn't expect the Sox players to forgoe their typical walk-up music, but transition from "Touch Of Grey" into a Salsa or hard rock was a little tough to swallow.

8. One of the more delightful things was to see a couple of fully costumed Dancing Bears on-field tossing T-shirts into the crowd and running a "Steal Your Base" promo with some kids as they booked down the right and left field foul lines at top speed.

9. The Jumbotron occasionally got in on the action.  With "psychedelic" designs behind White Sox player photos and statisics and a host of Dead-related trivia questions and factoids.  Sample: "What year did the Grateful Dead form?", Setlist from Woodstock (LOL). 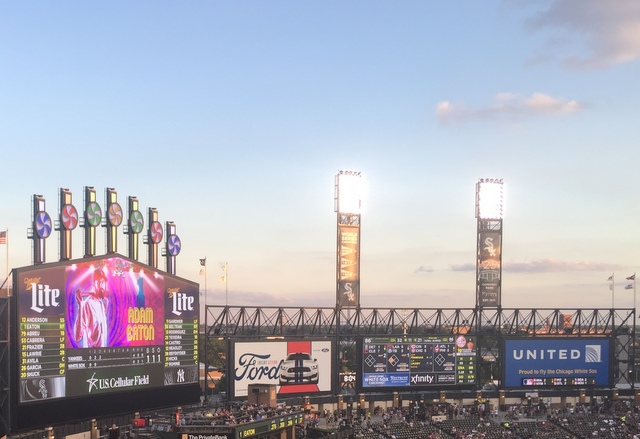 10. White Sox took a 9-0 beating at the hands of the Yankees.  The band had packed up by the middle of the 9th and all semblance of Dead night was pretty much gone.  The PA operator blasted Outkast's "Hey Ya" as if to say: "Deadheads Go Home".